After a couple of frustrating years spent hunting for a new home, Paul and Sarka embarked on a self-build journey with Huf Haus to realise a property that met their high expectations

Making the decision to move out of London turned out to be the easy part for strategy consultant Paul, and his beauty therapist wife Sarka. There followed a long and fruitless search of the surrounding suburbs for a new-build home within easy commuting distance, but after visiting each property they were left bitterly disappointed, and everywhere the problem was the same. “My late father was an old-fashioned joiner, and I was brought up on building sites,” explains Paul. “I have certain standards, coming from that. Once the developer had shown us the glitzy parts of the house, I’d go and open the airing cupboard and stick my head in the loft. Frankly, it was the poor build quality that meant we didn’t find anything we liked,” he says.

But their luck changed when they were due to view an unfinished Huf Haus project – and were waiting for an estate agent who was running late. “We took that time to wander around the site, and I was immediately struck by the quality of build – the fact that this house, that was made largely of wooden beams, was just so well put together. Then when we went inside, we loved the open nature of the environment, and the fact that there was so much light, as most of the walls were glass.”

It was a decisive moment and a turning point for the couple. Paul and Sarka then contacted Huf Haus who explained their design and build process – now the hunt was on to find a plot, or a property that they could knock down. “One of the things that impressed me about Huf was that they thought about planning issues and problems getting planning permission, so they hired a planning advisor to help us,” says Paul. “We’d send him information on a plot or a house, and he’d look up the local planning guidance and give us a rating – easy, middling or difficult – on whether we were likely to get planning permission to build a Huf house there. That was fantastic.”

The advisor was so efficient that once an old Surrey property that fitted the bill had been found and purchased, planning permission went through first time round, and then the couple travelled to the Huf village in Hartenfels, Germany, to settle on the design of their new home. “It’s a very well-planned journey,” explains Paul. With his dad having been a builder, he was able to present a design to the company that they then refined. “You spend two days in the village looking at the different examples of what they can do, and you really work through every detail.”

He’s keen to stress that while there is a broad selection of designs that you can select from as the basis for your choice – theirs is the Bauhausinspired Huf Art 5 – the Huf approach is far from ‘cookie cutter,’ and is actually highly personalised. Working closely with Peter Huf, the company’s chief architect in the UK, Paul and Sarka were able to come up with plans for their home that ticked all the boxes on their wish list. With another two days spent in the village in Hartenfels talking to different teams to finalise everything from the sophisticated heating system to colours, taps and cupboard handles, as well as having lunch with Georg Huf himself, they were poised to begin.

Having completed on the Surrey property in April, the site was cleared by October, the foundations were laid in December, the outdoor swimming pool went in the following January, and the actual build started in February. “Once the concrete base was in, the house and garage were up nine-and-a-half days later,” says Paul. “Then it took two months for the fit-out of the interior – it’s all remarkably quick.” The couple, along with their five-year-old son John, moved in at the beginning of July.

The two-bedroom, two-storey home is constructed from renewable Nordic spruce, and has vast glass walls that offer uninterrupted views of the surrounding garden and let in plenty of natural light. The house benefits from triple glazing and has additional glazing in the gabled roof that heightens the sense of being connected to the outside. A core feature is that characteristically open atmosphere that Paul and Sarka initially fell in love with when they first set eyes on a Huf house, with all the living areas flowing seamlessly into one another, while the dining area is an expansive double-height space located at the heart of the home.

Paul is particularly happy with the kitchen – it’s designed and built by furniture manufacturer and Huf subsidiary StilArt – which also created the bedroom and bathroom furniture – according to his own personal vision of the space. It features sleek white cabinetry, an island preparation area and a conveniently positioned wall of Gaggenau appliances. However, it is the bathroom that is his and Sarka’s favourite part of the house. Bathed in natural light and decorated with Bisazza mosaic tiling in varying shades of grey, its atmosphere is peaceful and calming. It measures a generous 30 square metres, and is complete with spa bath, walk-in shower, and adjoining sauna and steam room. Sarka also has a beauty treatment room in this area of the house for when she sees clients, while John has his own ensuite.

Huf Haus prides itself on the fact that it follows the strictest sustainability criteria, and its DGNB certification is proof that each house leaving its factory in Hartenfels has met German Sustainable Building Control’s gold standard. For Paul and Sarka, this aspect of their home is the biggest revelation. “The energy consumption of the house is phenomenally low,” says Paul. “We meet the German standard for 25 years from now. We have 88 light fittings, but our total energy bill – including a heated swimming pool – is £400 a year. Plus we get £2,000 back because we have ground-source heating and solar panels under the Government’s scheme. So we’re net carbon negative in a way that actually generates an income!” he laughs.

Added to that, in spite of the fact that 80 per cent of the walls are glass, he says the temperature and air quality in the house always feel exactly right because of the advanced builtin climate control system and ventilation technology. “We have a sophisticated heating system that produces 95 per cent heat retention with underfloor heating, and that inverts in the summer to become underfloor cooling. And as the air in the house is being continually refreshed, you’ve always got this feeling of fresh air.”

The openness of the interior makes it particularly family-friendly and the glass walls enable them to feel constantly connected to one another. This means that whether little John is somewhere indoors or playing outside in the garden, Paul and Sarka always know where he is. “We can talk to him wherever we are in the house and it makes you feel as though you are always in good company,” says Paul. “We’ve got the massive open gallery upstairs that looks down on the dining area, so I can sit in my office in that gallery space, and he can be downstairs drawing at the table, and we can talk to each other as if we’re in the same room.”

The smooth design and build process that Paul describes, along with the supportive aftercare service Huf provides – as an example, the couple were left with a substantial ‘repair kit’ for their new home and still receive gifts at Christmas from the German brand – certainly take the sting out of what might, for many, have seemed like a daunting undertaking. But ultimately, it is the finely tuned blend of functionality and ambience that this Huf house provides that has proved to be the winning formula – so much so that they are now thinking of selling their house and embarking on a new Huf project nearer to Paul’s roots in Yorkshire. “The core cost of our house was £1.4m. When I look at that cost, what we’ve got is good value for money compared to buying an old house and getting a company to come in and do a posh job on it,” he says. “There are things we’ve learned that we would tweak, but we would definitely do it all over again.” 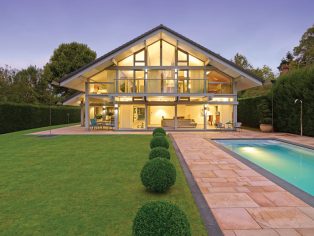