Your self-build budget: where in the UK has the most affordable tradesmen?

Diving into a new self-build home project is an exciting concept. From the foundational work to choosing carpets and lampshades that match the furniture, you can transform your new interior space into your dream home. There are many advantages to building your own home, the main one being that you can tailor it to match your specific lifestyle needs. From a financial standpoint, self-builds are also a great project that, in the long run, can draw in a large income too – many self-build projects can make a 25 per cent return in profits.

However, it’s no secret that they can be expensive, and depending on which area of the UK you’re planning to start building, the costs associated with the labour required can vary. With this said, using search data collected on the average cost to hire different tradesmen in different regions of the UK, we discuss the most affordable places to hire tradesmen.

Cost of hiring a builder
Northern Ireland is home to the most affordable builders in the UK, averaging at £131 per day. This is followed by Wales, where the average daily rate for hiring a builder is £178.

Tied third place as the region with the most affordable builders is the North West of England and the Midlands, both with an average daily rate of £194. Finally, West Midlands takes the fifth position for most affordable private builder hire, standing at £198 per day on average.

Taking fourth and fifth position for the regions in the UK with the highest daily rate for a builder, London and the South West region charge around £215 and £211 per day. 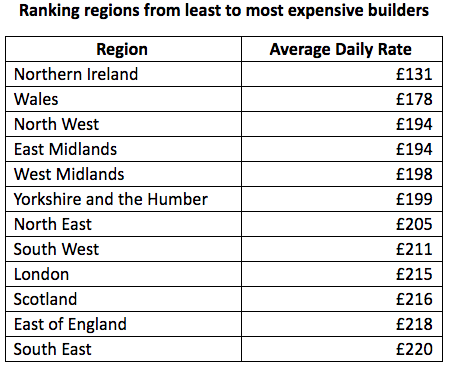 Cost of hiring a plumber
If you’re looking to hire a plumber to help with your self-build project, data reveals that your location will definitely affect your budget.
Once again, Northern Ireland takes the top spot for the most affordable tradesmen, with an average daily rate of £200 for a plumber. In second place, plumbers in Yorkshire and the Humber will charge an average daily rate of £221, followed by plumbers in North West region, who charge £229 per day, making these the second and third most affordable regions for private plumber hire.

For those in the East Midlands region, you’ll be pleased to know that this is the fourth most affordable region for private plumbing hire, averaging at £232 per day. As for those in West Midlands, you can expect to pay £244 for this service.

As for the fourth most expensive daily rate for a plumber, you can expect to pay an average of £263 in East England. Finally, the fifth most expensive place to hire a plumber is the South East, where a daily budget of £261 is expected for this work. 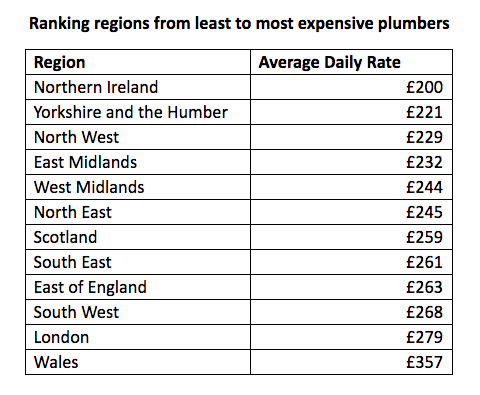 In the East England region of the UK, electricians cost £242 per day on average, making this the fourth most expensive place to hire an electrician, followed by the South West region, where you can expect to pay £234 on average per day. 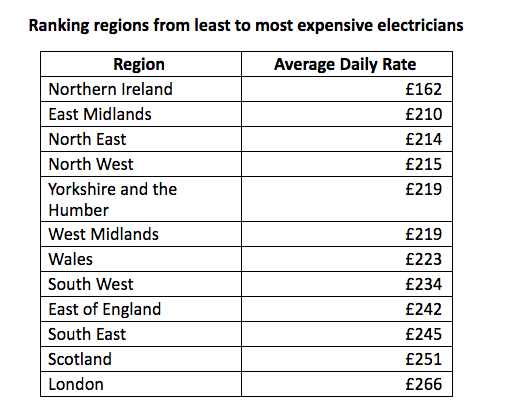 Now that we have uncovered the most affordable and the most expensive places in the UK to hire tradesmen, where will your next self-build be? Of course, the financial aspect shouldn’t be the ultimate decider when choosing the perfect destination to start a new self-build project. However, it is definitely something to take note of! Plus, there are many ways you can look at reducing costs in other aspects of your project, such as affordable skip hire and looking for the most affordable resources and materials to use.