British ventilation manufacturer Vent-Axia continues to lead the way in reliability with one of its Silhouette bathroom fans celebrating its sixteenth birthday. Installed in 2005 in a family home in Hornchurch, Essex during the refurbishment of the property’s main bathroom, the fan is still going strong 16-years later. The Silhouette fan has worked effectively during this time without requiring any attention and continues to improve indoor air quality and combat condensation and mould. It is this longevity and reliability that is central to Vent-Axia commitment to sustainable high-quality design.

Originally chosen by the household for its reliability, the Silhouette fan hasn’t disappointed. While it has never required any repairs, Vent-Axia fans are designed to be easily repairable and are simple to maintain thanks to the company’s extensive spares department. This all leads to further improved fan longevity and so reduced waste, helping lower environmental impact.

“When we were refurbishing our main bathroom, we realised that effective ventilation was important to avoid unappealing and unhealthy mould and to extract all the steam from baths and showers. We wanted to make sure the fan we installed would be reliable and would last and this led us to choose the Vent-Axia Silhouette fan”, explains homeowner, Gary McSweeney. “We have not been disappointed and are so impressed that it’s still going strong all these years later. We liked it so much that when we needed a fan for our loft bathroom we went back to the Vent-Axia brand and chose the new Silent Fan which we are also really pleased with.”

“Vent-Axia is committed to sustainability and limiting environmental impact. We are well established for making reliable, energy efficient products that reduce energy consumption and carbon emissions”, explains Lena Hebestreit, Marketing Manager at Vent-Axia. “By also offering a high-quality spares department we go one step further. By developing products that can be repaired rather than replaced should they develop a fault, we can make a real difference to ventilation’s environmental impact. But it’s not just newer products that are repairable. At Vent-Axia we’re well known for our spares department which has a wide range of products available allowing fans to be repaired whenever possible.”

The Vent-Axia Silhouette fan range blends in with the wall surface to provide an unobtrusive installation combined with downstream airflow guide vanes for improved pressure development. Suitable for wall or panel mounting, the fan can be installed at any angle, either horizontally or vertically. The reliability and longevity of the Silhouette is in part thanks to its long-life ball bearing motors which are combined with low power consumption for lower running costs and reduced environmental impact.

In the past manufacturers often recommended that faulty fans should be thrown away and replaced with new ones. Not only is this expensive when a fan has exceeded its warranty period, but a lot of unnecessary waste is sent to landfill. Vent-Axia has therefore tackled this issue head on and has designed fans which have individual modular components that can all be replaced separately, considerably reducing the amount of waste. For example, the company’s Lo-Carbon Revive fan has modular components so if a social housing provider needs to replace a fan, in many cases a new spare part could be ordered instead helping to avoid replacing the fan unit and so avoiding the whole unit ending up in landfill. In the last year, 640 Revive fans have avoided going to landfill.

Vent-Axia has led the ventilation industry since 1936 developing landmark products. For instance, in 2010, Vent-Axia was a trailblazer with the launch of its energy efficient Lo-Carbon range of fans that were designed to lower carbon emissions. A decade later Vent-Axia is now forging ahead with an R&D programme, which will reduce waste, once again proving itself as an industry frontrunner. With Mr McSweeney’s fan celebrating its sweet sixteenth, the company is hoping all its fans will serve customers for many more years to come improving the indoor air quality in their homes and buildings

For further information on all products and services offered by Vent-Axia telephone +44 (0)344 856 0590 or visit www.vent-axia.com. 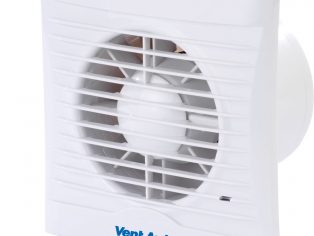