True to their words

When Astrid Woloszczuk and her husband set out on their self-build journey, they wrote a list of key words that captured how they wanted their new home to feel. The result’s a project that has realised all their dreams – and much more

When living in an Edwardian townhouse in London with three young children started to feel “somewhat squeezed,” former management consultant Astrid Woloszczuk and her husband embarked on a search for their next home. “At first we looked for bigger houses, but none of them had what we wanted in terms of practical living space,” recalls Astrid. Having exhausted the possibilities of what was available on the market in their area, they started to think about building their own home, but again, they weren’t spotting any potential developers whose work they loved. But when the Baufritz name came up in their research, the more the couple learned about the company, the more they felt drawn to them.

“I liked the concept that it’s a pre-build prefabricated house but they don’t tell you what the design has to be – they are high quality, but also very flexible,” she explains. “I looked at others in some detail but I just couldn’t make them work – at the end of the day they were very prescriptive, down to the fact they even have their own kitchen provider. I liked the fact that Baufritz said you can come with any architect and do whatever you want, as long as you stick within certain measurements.”

Having found a road near Richmond Park where a lot of the existing houses had been demolished and redeveloped, they settled on a property on a plot that seemed to offer what they were looking for. By this point Astrid had compiled a scrapbook of design ideas, where she meticulously outlined all elements of how she wanted the house to look, from her vision for the outside, through to the facades, materials, and staircases, as well as the kitchen, living room and bathrooms. “We also did a word cloud of what we wanted from the house,” she reveals. “We had words like ‘playful, colourful, fun, luxurious, spacious, and clutter-free’. But we did not have words like ‘stately, grand, quiet, elegant or formal’. We worked out what sort of feelings we wanted associated with the building.”

Additionally, Astrid put together a spreadsheet model in which every cell was a 10 x 10 cm2 footprint of the house, and mapped out a rough layout of all the rooms. “Then we gave that as a brief to our architects and they were amazing in taking all these disparate thoughts and putting them into something that was quite stunning,” she says. While Baufritz was involved at this point, the team only interjected whenever they thought that any of the ideas in discussion presented practical challenges or concepts that might prove costly.

But although so far each phase had proved problem free, obtaining planning permission for the build itself was to be another story. In spite of the fact that there was no specific architectural aesthetic in the local area, there was a mix of Tudor, Georgian, Victorian and Edwardian period styles, and complaints were coming in around the couple’s proposed contemporary design. “Then the planners couldn’t tell us what they wanted in terms of the envelope of the building – their problem was not the look of it, but that they thought it protruded slightly too far into the back garden.” Eventually, however, issues were resolved in a face-to-face meeting with the planning office, and finally they were able to proceed.

With the project back on track, it was time for some final decision making. During a pre-sampling trip to Germany over a long weekend, Astrid and her husband looked in detail at the show homes and design centre, making key structural choices alongside Baufritz’s team of designers. Ahead of the second week-long sampling trip to finalise every detail, Astrid sent in her scrapbook to streamline the process, and when they arrived they were presented with a preselection of every product needed for them to narrow down. “It helps if you have a vision,” she says. “I wanted to have a white wash oak floor, so we told them that in advance, and they showed us three different shades of white wash, and then four different grain levels. Each with a different price tag so you then decide which one you want to do.”

Problems around the configuration of the main bathroom were solved in a designated empty room at the centre that is specially created to iron out design issues. “They have moveable walls, and they can build it to be roughly the space of your room. Then they have a bathtub and a toilet which you can move around to different positions, which helps you visualise it a bit more,” she says.

The build itself took 12 months to complete. A leak in the basement at the start of the process threatened to set them behind schedule, but after it had been resolved Baufritz picked up the pace to put them back on track. With Baufritz overseeing all the contractors, Astrid visited the site around twice a week to check in on progress.

The finished, timber-constructed house is visually stunning, and broadly based over four terraced levels. Astrid says: “Now it’s finished, I like the fact that it’s built with wood and not with bricks – I think it’s not only much healthier for us, it’s much more sustainable.”

She sums the design up: “Imagine a shoe box, and cut out one corner and shift that by half a storey. It’s only four floors, but at every landing we have an actual room.” The garden at the back is sympathetically designed, with an emphasis on simplicity so the children can play in it freely and safely.

A stand-out feature of the property is its generous proportions, and in particular the expansive open-plan design at the heart of the ground floor. “It’s very large and the area is split not by walls, but with levels,” says Astrid. “For example the living room is a quarter level down from the kitchen, and then we have a kind of bar sitting room which is half a level down. Then it all revolves around a central open space.”

Constructing this area was complex as the couple were keen to keep it free of pillars to maintain the sense of spatial flow, so they needed to incorporate extra steel beams. “We effectively have taken out all the pillars that you normally need for a wooden construction, but Baufritz didn’t stop us in any way – they just pointed out where we would need another steel frame. Getting rid of all the supporting pillars was definitely our biggest extravagance – that required lots of steel!”

In spite of the vastness of the room, it has a warmth that the couple have created by introducing plenty of colours and textures into the mix, and this is a theme that they have extended throughout the build’s interior. However, sitting on the sofa in this central space is Astrid’s favourite place to be in the whole house. “From that position you are, in a way, hidden and seen by everyone at the same time – it sounds a bit strange, but it’s very secluded even though it’s in the middle of a huge open space. The architects were very clever in looking at how you can see from one end of the house to the other – there are lots of lines of sight that give you a lot of connection. So we can all be connected even if we’re in our own separate area.”

So how does this house compare to their previous home? “The house we had previously, we had bought something that someone else had built, and it was as close as we could get to something we liked. But I think it’s an amazing opportunity to have a plot of land and start from scratch. This is our house and we made the decisions,” says Astrid. And while a self-build project is definitely something she would consider doing again, she finds the idea of moving from this house difficult to entertain. “I can’t imagine that we’d leave this house and go somewhere else in London. I can’t possibly see why we would ever do that,” she says. “This property has absolutely changed our quality of life. It’s bigger and it’s so much better built – I got everything I wanted,” she says simply. 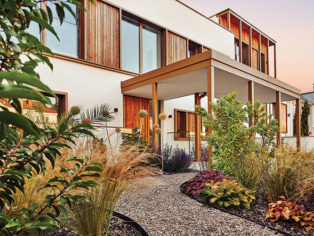 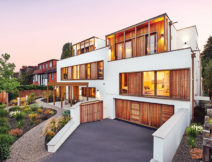