The trails all lead home

Calum and Gladys Trail looked at a lot of options for pursuing a self-build, and they managed to find the answer under their noses, on their existing site in the north east of Scotland

Even when they moved into their bungalow – built by Gladys’ parents in Inverurie, Aberdeenshire – over a decade ago, the chance to build their own place was on her and partner Calum’s minds.

In fact, one of the main reasons why they moved here, as well as the sentimental value of keeping the building within the family, was that the half-acre plot of land had potential for another home to be built on it. Finally, after 13 years living there, the Trails decided it was time to fulfil their dream.

Having both grown up in Inverurie, moving out of the area was always going to be hard for the couple. At one point they contemplated moving to more rural parts, but quickly dismissed this idea; Gladys was “concerned that it wouldn’t be a good idea as they got older,” explains Calum.

In addition, their existing home was in the ideal location; “We had easy access to Aberdeen as well as having great shopping facilities.” Whatever the next step in their journey was, it was going to be in Inervurie.

Although a self-build was their big ambition, they did consider some other options along the way. “We had a look around some new builds in the area, but they all seemed to be very close together,” says Calum, adding: “We were used to living in a large, open plot of land.”

They also nearly went down the route of selling the land to a developer, but in the end, because of the location’s convenience and potential, they finally decided that they were going to build in their own back garden. “We knew that we had enough space for a new house in our garden,” says Calum, “building on it would be an opportunity that we couldn’t afford to miss.”

Having never designed a house before, the Trails weren’t entirely sure what they wanted, but this meant they approached the project with an open mind. They did however have some preferences in mind. “We wanted an open plan living, kitchen, dining space, as well as lots of glass so the house is flooded with light – those were our main requirements,” assets Calum. A bonus would be to have a music room for Calum, who is a guitarist, and an ensuite dressing room for Gladys.

But before any of the designing started, without planning to do so, the project ended up taking a fabric first approach. As a way of enhancing their self-build knowledge, the couple attended a variety of self-building events. At one of the exhibitions in Glasgow, the couple recognised some of the representatives on a stand. The company was Scotframe, one of the largest suppliers of timber frame kits in the UK, and who happen to be based in Inverurie. “We were very impressed by the quality of the materials and build quality, and by the fact that they were a local company!”

As well as discovering a kit home’s ability to achieve a high insulation rating, they say they were also “wowed” by the cross-sections they saw, which showed “how much insulation goes into the walls.” Also they were keen on how the standard kit designs could be adapted to meet their requirements. With the couple being new to the whole kit building arena, having a company with strong credentials just around the corner was hugely appealing.

Finding an architect was next on the list, and Scotframe recommended architectural technician Martin Cobban. “He was the ideal choice,” says Callum, “as he lived directly across the road from us! He was very well placed to keep an eye on the build.” Following their brief, Martin “came up with something that we both liked. He was great to work with.”

Obtaining planning permission was slightly more sticky than they had anticipated. The local authority were concerned the proposed design overlooked the Trails’ old bungalow, and were “very firm about not allowing that to happen.” As this meant revising the original designs, it cost time and money.

To prevent any more hitches, before the second set of plans were submitted the couple organised a site meeting with Martin and the planning official to collaborate on the redesign. “In the new plans the house was moved around by 90 degrees and the bedrooms were switched to the front, leaving us with a south-facing living space, overlooking the garden.”

Their case was based on the fact that the house is next door to the regional office of Aberdeen Council, which may be closed at some time in the future, when the site could be given over to housing. Calum explained to the planning official that if the home was orientated in the direction the planners wanted, they could potentially overlook the whole new development. “He took that on board, and after that meeting, the planning department approved our new plans.”

After appointing local contractor Michael Duncan Builders, who had worked with Scotframe before, the team broke ground on 5 November 2019. The Trails assert that the builders did a “superb job of coordinating everything” and “making sure that the right people and materials were on hand when needed.” Keith Duncan, who handled the build, showed them around homes that he had worked on, pointing out features and making suggestions about what they could do. “It really helped us to get an idea of how we wanted our home to look.”

But when Covid hit in March 2020, all work stopped – resuming in September. Fortunately, because of the “incredible” speed in which a Scotframe kit goes up, says Calum, by the time lockdown came around the home was already wind and watertight, meaning the structure wasn’t affected by having to sit in limbo. “I was heading to work in the morning when the kit turned up on the back of a lorry, and by the time I got back at 5.30 pm the walls were up and the roof trusses were on!”

On top of Covid, connecting to the utilities was another unforeseen obstacle. “We thought it would be easy to connect to services as we already had a house on site, but it wasn’t that simple. In the end, they had to tunnel under the road to get us connected.” As this involved putting temporary traffic lights in the street for a week, it was a significant cost which ended up pushing them over their planned budget.

Despite these challenges, Calum says the rest of the process was “reasonably smooth,” and that the “level of service that we got from the builders was exceptional.” The Trails moved into the new home exactly one year after starting onsite, on 5 November.

Despite the three-bedroom bungalow being constructed using a timber frame, the exterior doesn’t give this away. The house has been rendered in light roughcast, with black tiling on the roof. The porch housing the large dark front door has been constructed from ‘black’ granite, which is grey but becomes glossy and black when it rains.

The layout of the home is slightly unusual; the three bedrooms are located at the front where you would usually expect to find the living areas. Two of the bedrooms are ensuites, and the master bedroom features Gladys’ dressing room. As you travel down the corridor leading from the front door the home opens out into an open-plan living area with the dining and kitchen spaces.

The aesthetic choice of using elements of black on the exterior, including the anthracite window frames, continues inside. The furniture, lighting, and bathroom walls are finished in black, a strong contrast with the brightness of the walls as well as the oak flooring throughout the home. “We knew that we wanted a clean, contemporary look,” says Calum, which is echoed in the floors and ‘streamlined’ kitchen. A feature in the living space is a large, gable-height window with ‘self-cleaning’ glass, due to the difficulty of reaching its extremities.

“Our new house is far more efficient, and that makes a difference to fuel bills and our level of comfort,” says Calum. It does include gas and electricity, but there are two solar PV and two solar thermal panels on the roof, the latter to heat the hot water. The home is heated with underfloor heating, but as Calum explains, because of the high solar gain from the windows, “even in winter we hardly ever need to switch the heating on.” The high levels of thermal insulation trap the heat, making it warm even in the depth of winter. He adds: “Here in the north east of Scotland winters can be very harsh, but the moment the sun appears the house becomes warm, and it stays warm.”

Although the Trails faced some challenges on their self-build journey, they are over the moon with the final result. “We love the whole look of the house, in particular the open plan space, the amount of light that floods in.”

Opting to build with a kit frame was definitely the right choice for the project, explains Calum. “The standard of the kit was exceptional, and it is exactly the house we had hoped for.” For the pair, despite Covid, it simplified the construction process and he would recommend anyone who is thinking of it as an option, to go ahead with a timber kit.

With the importance of achieving a low energy home never being so important, particularly now as gas and electric prices are rising, the selection of a timber frame was definitely the “sustainable choice,” says Calum.

“After watching the house take shape in our back garden for a year, the high point came the day we moved in. It is such a pleasure to live in the house and it delights us every day. Walking into the open plan living space is a continual pleasure.”

“Finding out that getting a connection to services was going to be difficult and expensive.” 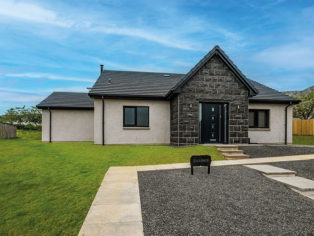 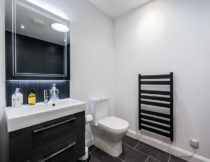 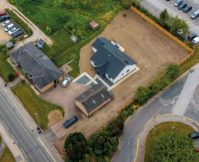