Outbuildings on the site of a historic farmhouse in rural Hampshire have been cleverly transformed into a ‘later living’ home, by an owner who was keen to downsize, in a project that triumphed over Covid

When the owner of a part-17th century, part Georgian Grade II Listed building decided it was time to downsize, it came as something of a surprise when she realised the solution was right under her nose the whole time – in her own back garden. Having lived in the farmhouse for the last 40 years, Caroline Abbate had realised that she needed to downsize, and find a more suitable home to meet her changing needs.

Her large, historic home, Northend House, was originally designed as a small farmhouse in the 17th century. Over the centuries, different sections of the building have been extended, and more recently, a larger, grander Georgian frontage facing the main route through the village was added.

Despite her love for her home, it had become “too big, and unmanageable,” says Caroline, adding: “The house required a lot of upkeep, and needed younger owners with the energy to modernise it.”

When it came to searching for her ‘later living home’, staying in the local area was a top priority. Having been settled in the village for four decades, and with a network of friends nearby, she had no intention of moving to another area.

Caroline’s key requirements, when it came to the actual design and layout, were “somewhere small but not too overlooked by neighbours, characterful but not requiring too much maintenance, and a good-sized garden.” It was also vital that everything was accessible on one level. Aesthetically, she wanted “a place that was warm and filled with natural light.”

But with this fairly demanding brief, and the fact the village didn’t offer much choice of available property, her options were limited. After two years of unsuccessful searching, Caroline’s son-in-law, an architect at London practice Emrys Architects, suggested that she consider something even closer to home.

Neighbouring the farmhouse were two old outbuildings. Originally designed as cowsheds, the structures had more recently been used as horse stables and a woodshed. “My son-in-law explained that there may be a possibility of carving a suitable home from the simple outbuildings on site, ” says Caroline.

At first Caroline was sceptical, wondering whether these old buildings which had sat in her garden for so long could be turned into her next home. Her initial feelings were that it would be “far too small and cramped.” However, after drawing up a couple of designs, the architects convinced Caroline of its potential, and eventually, she got on board. “The solution was right there this whole time, and it was also going to cost considerably less!” says Caroline.

If they were going to pursue the idea of converting the existing outbuildings however, Caroline was determined that a new structure wouldn’t compromise the traditional aesthetic: “It was important that a new home looked in keeping with the existing.”

Emrys’ proposal was essentially to divide the site and create a separate home by refurbishing the outbuildings. To minimise the impact the dividing wall would have on the historic farmhouse, the plan was to build it with traditional methods by local masons using flint, repurposed bricks and natural lime mortar.

Even though she was looking to downsize, Caroline is still an avid gardener, and having a home that provided easy access to a garden was imperative during the design phase. “It was important to me to keep a good section of the garden that I have worked on for so many years, and to be able to look over it from the house.”

She adds: “I also wanted to have good light coming into the house and a view of the south facing garden so it made sense to try and include a large amount of glazing.”

Caroline reports that it was a fairly straightforward process to get the design through planning. “The planners were very supportive of our ideas, and felt the contemporary elements worked well with the old buildings.” One minor stipulation emerged when a neighbour had concerns about the original plot being divided, and the impact it may have on the listed building. However, because of the team’s well-devised designs, this was quickly resolved.

During construction, Caroline left her daughter and son-in-law in charge of project managing the build. Covid disrupted the project, with subcontractors initially being furloughed, and then “not having the capacity to complete the work when required,” explains Caroline. Further delays occurred when materials such as plaster became difficult to obtain, causing a knock-on effect of the programme. “Some costs were higher than expected due to the pandemic. Fortunately, there were a couple of suppliers that were able to provide some of the packages – for example the glazing,” explains Caroline.

Despite these challenges, the three principal construction workers carried on operations through the pandemic. Caroline says that although “it was difficult living right next to a building site, the builders were very considerate and supportive and were good company while I was isolating in lockdown.” Construction started onsite in November 2019 and ran through until January 2021.

When you think of a ‘later living’ home, many people would associate them with traditional notions of care homes, assuming a somewhat old fashioned look and feel. But Caroline’s and Emrys architects’ design boasts a blend of both old and new – combining traditional build methods with eco friendly features and modern elements.

Her home is comprised of both outbuildings – the stables and woodshed have been refurbished to form the majority of the house, with an extension having been added onto the stables facing out into the garden. This has created a 114 m2, two to three-bedroom home which has exceeded Caroline’s expectations.

A unique feature, and one of the more contemporary aspects of the build, is the glass link which subtly links the two outbuildings together. “This was a clever solution to link the two buildings with minimal interruption,” says Caroline, with the original shape and design of the structures still being visible from the outside. Not only does it provide a passage from the main living area (the former stables) through to the guest bedroom and ensuite bathroom (in the former woodshed), but it also floods the home with natural light throughout the day.

In between the two outbuildings sits the courtyard, which houses the main entrance. “The courtyard is bisected by the glass link – this works well as plants behind the glass are visible from inside and outside – it is useful as a winter garden,” explains Caroline. “The courtyard will eventually be more populated by foxgloves and other self-seeding plants that didn’t survive the building works.”

So the home sits comfortably next to the existing 17th century building, a lot of effort has gone into retaining as much of the original structures as possible.

A large proportion of the external fabric has been preserved. The roof of the stable block has been retained and insulated from the underside, while the woodshed’s roof has been insulated on its exterior – allowing the retention of the internal roof joists and timber ties. The original stable doors have been renovated and used as external doors with new inner glazed doors inside. Where possible the team used traditional materials of flint, re-used bricks, and timber.

To achieve an “easy to run” home, the interior layout has been kept simple and practical. As you walk in through the main door, the master bedroom is on the right, with easy access to the adjacent bathroom. Carrying on down the hallway you come to the utility/boot room with a back door that opens up into the garden.

To the left of the main entrance is the kitchen, which sits as the “heart of the house,” a compact, minimalist space that is “easy to clean and maintain.” The extension is off the kitchen, facing south and forming a dining/ garden room with floor to ceiling double glazed windows providing a “full length view of the garden.” This space creates an “intimate connection with the outside,” says Caroline.

A TV room/snug sits to the east flank, offering a place to relax while also doubling up as a third bedroom when required.

The interior design of her home, named Northend Stables, has references both modern and traditional. Upon entering, you are instantly impressed by the bright white interior that continues throughout the property. “I expected to use more colour but as the project progressed I didn’t feel the house needed much more as it has plenty of characterful features already – so it’s almost entirely painted white,” says Caroline.

The kitchen’s flooring is finished with limestone flagstones which carries on down the glazed link and into other parts of the home, beneath which is underfloor heating. The traditional elements such as antique furniture and recreated timber plank ceilings add a touch of warmth alongside the bright white walls. The team were able to retain the existing ceiling timbers in the woodshed by adding insulation externally, and the ceiling in the garden room extension is also of exposed wood.

As well as reducing embodied carbon by preserving the existing structures, all of the stone and bricks found on the site were salvaged and reused. The building also has high levels of insulation: all of the new windows are double glazed while the internal walls and roofs have been fitted with 200 mm of insulation.

It was always Caroline’s ambition to move away from an oil-fired heating system to a more environmentally friendly air source heat pump. It now provides heating and hot water, as well as serving the underfloor heating. “I now have a well-insulated home, which is welcome after living in a draughty old listed house,” says Caroline.

While Caroline has loved the self-build journey, she has been surprised by how much thought and planning goes into each little detail. “I had no idea how much work, both design and construction would go into something that looks so simple. It has been interesting seeing the bare stable walls coated in insulation, electric cables, plaster etc and it slowly turns into a home.”

With the build complete, everything the team set out to achieve has been achieved. “I am very happy with the result – my house feels both spacious and cosy and I haven’t had to move far. I particularly enjoy the view from the garden room.”

Caroline does however conclude with a warning to other prospective self-builders that “it will probably take longer and cost more than you expected! 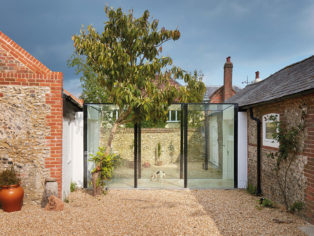 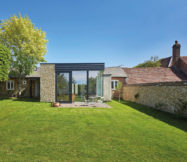 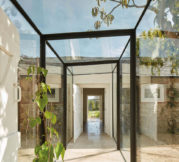 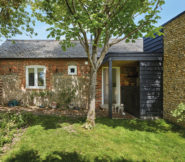 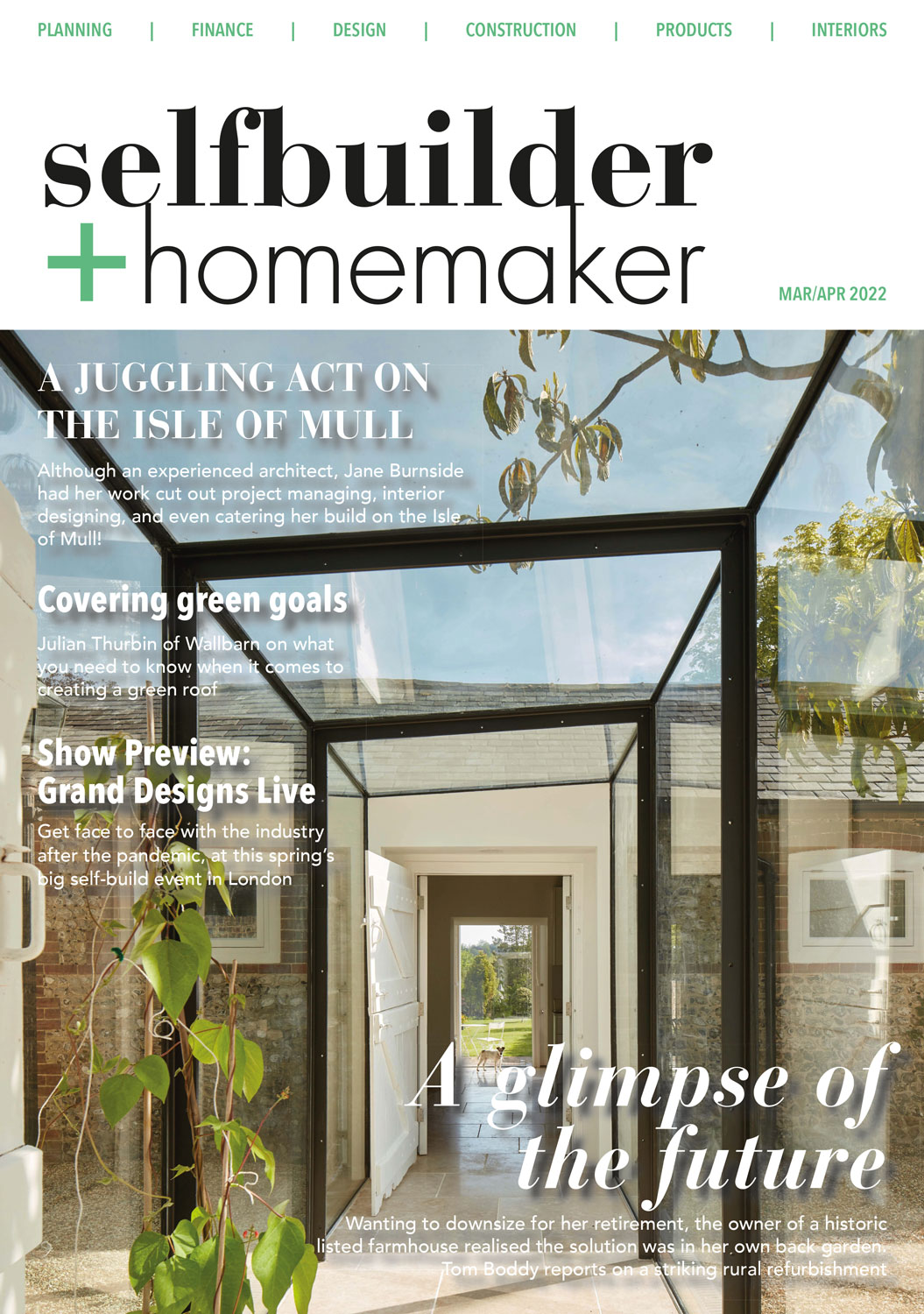 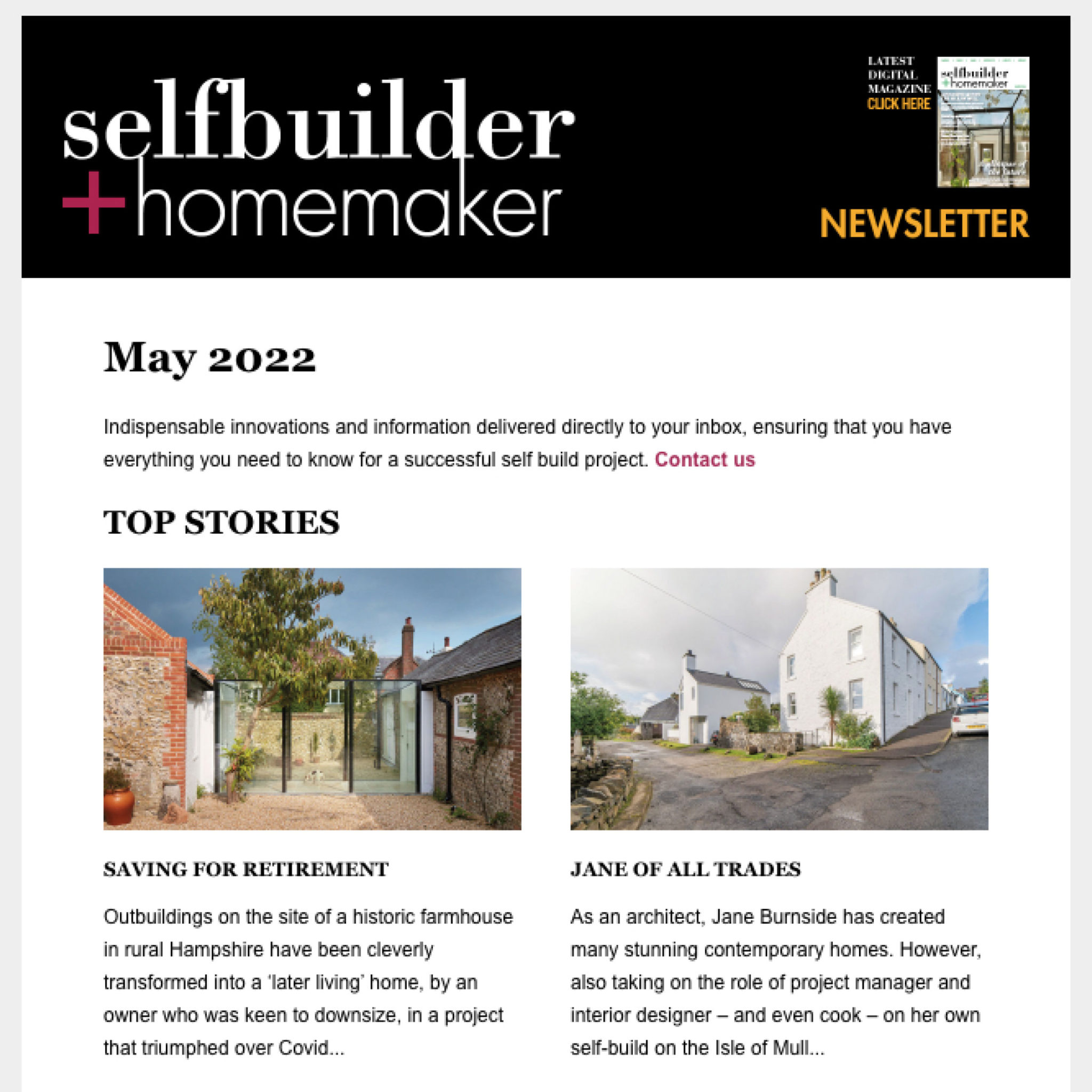