You might think rooflights are a modern invention, but as Peter Daniel of The Rooflight Company explains, they have a long history which ties into humanity’s perennial desire to bring light into buildings

Natural light has been worshipped since time immemorial, even pre the agricultural revolution which occurred approximately 12,000 years ago. Every culture has at one time or other worshipped the life-giving ball of fire in the sky, and while it would be a bit grandiose to say that this is the ultimate beginning of the story of rooflights, it also wouldn’t be totally wrong.

Natural light has been critical to architecture since we first started making our own dwellings in the prehistoric era. Ultimately, from a practical standpoint we have always needed to be able to see what we’re doing. But we first see evidence of natural light going beyond the perfunctory and becoming a focal point of architectural design, a celebration, or a tool for the dramatic, as long ago as 4,000 BC in Egypt and China. And the primary drivers of this change were religion and royalty.

It’s not until the period between 1 BCE and 1 AD that we see what could really be called the direct ancestor of the modern rooflight – the atrium. The Romans’ advanced engineering and architectural skills allowed them to build houses and public buildings with atriums – literally a hole in the roof to let the light in and the heat out – as a matter of course for all statesmen and wealthy homeowners.

Over the next 1800 years or so, something akin to modern-day rooflights developed from atriums with the simple addition of artisan glass, but they remained rare and exclusive. It wasn’t until the Victorians came along, the great architectural and engineering innovators that they were, that glass became clear, consistent, easily mass-produced, and cheap.

They marked this wonderful achievement of harnessing natural light at the Great Exhibition of 1851, with the construction of the iconic iron and glass Crystal Palace in Hyde Park, London. It was the grandmother of all rooflights, a completely glazed roof, and it’s no surprise then that the massproduced Victorian rooflight followed shortly thereafter.

The first cast-iron rooflights came in two styles; ‘deadlight’ or opening. They were top hung, flush to the roof, single glazed and utterly beautiful. They were also prone to rusting, and about as thermally inefficient as it is possible to get (atriums just edging into first place on this front). The next step in the rooflight’s evolution may be more familiar to you. With the invention of plastic polymers, and multi-glazed window systems, the thermal efficiency of windows improved, but we lost some of the aesthetic appeal of windows and rooflights, and they often clashed with older properties.

That’s where the next major innovation in the rooflights occurred, where modern spec met the superior aesthetic quality of the days of yore. Products like the Conservation Rooflight, a steel replica of the original cast-iron Victorian rooflight that is double-glazed but still authentically top-opening have that 1850s look, but are fitted with specially developed thermal shielding to perform like a modern window.

Since then, rooflight-related developments, in terms of both technology and aesthetics, have boomed. We now have modern, flat and energyefficient rooflights, the likes of which would have boggled the minds of Victorian architects, and yet still retain that high quality look and feel they would expect.

The bottom line is, it doesn’t matter how aesthetically demanding your design is, whether it be listed or in a conservation area, or recently built and high-spec, we are living in the golden age of rooflights and there is something perfect out there for your project. The really key thing to consider is you will probably look out of that rooflight for decades to come, so it’s worth getting it right.

Peter Daniel is product innovation director at The Rooflight Company 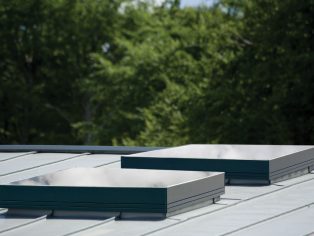 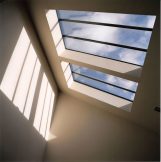