Carl and Rachel Philips invested everything they had in breathing new life into one of the oldest, and most fascinating, properties in Stratford-upon-Avon

Carl and Rachel Philips’ house is so old, and so ‘wonky,’ that they had to saw off the legs of their beds at different heights just to get them level on the uneven floors. One bedroom wall is so bowed, it is virtually impossible to hang pictures on, and the stone floors – laid on bare earth – are covered with jute rugs to allow the flagstones to ‘breathe.’

Such challenging quirks and foibles, along with some eye-wateringly expensive structural work to the gable end, would have deterred most people from buying the 500-year-old house in Stratford-upon-Avon, but for Carl, a festival organiser, it was nothing short of a dream home.

‘I am a big fan of anything to do with Medieval history, so when this house came up for sale for £250,000 I couldn’t believe it,’ he says. “Rachel and I had been looking for a place to run as an Airbnb, and this was a fantastic opportunity. We came to see it on a cold wet morning in January 2018. It smelt damp, there was water running down the inside walls and the carpets were covered in mildew, but I walked into the sitting room and the first thing I saw was a 16th century wall painting…I felt so emotional I wanted to cry. It sent shivers down my spine. I just had an overwhelming sensation that this house was meant to be ours.”

Mason’s Court is certainly a fascinating property. The long frontage of the Grade II* listed property dates back to the 15th century, and is believed to be a ‘Wealden house.’ It was owned by the town for centuries, until 2016 when it was listed for private sale. The brick chimney stack is thought to have been rebuilt in the 1920s.

But Carl and Rachel struggled to pull the money together to buy it, and although their offer was accepted, they were gazumped by a cash purchaser. Carl was devastated – until the cash buyer pulled out because of the amount of structural work required to prevent the crooked old house from falling down. Carl and Rachel were back in the running – and this time secured the deal directly with the vendor.

They explained their financial difficulties and, between them, they came up with a payment system which worked for everyone. Carl and Rachel were, finally, the proud owners of the three bedroom, Grade II * listed Tudor cottage which had been described by historian Dr Robert Bearman as ‘Stratford Upon Avon’s Finest Medieval House’.

The property was built in 1481 and extended in the 17th century. Judging from the state of it when Carl and Rachel took it on, it hadn’t been modernised since then. There was no heating, walls were shifting, and there were blocked chimneys and a year’s worth of accumulated damp. It was going to take determination, a huge amount of effort and some serious positive mental attitude to bring the precarious old building into the 21st century, without losing any of its character and working within the restrictions of its unusual listed status.

They went so far as to spend hours researching similar historic buildings, understanding the complex expectations of the various interested bodies and working out ways of restoring the stunning old property in the most empathetic way possible within their already stretched financial situation.

With the help of friends, Carl and Rachel began a three-month renovation schedule which included stripping out a 1960s gas fire and its concrete base; replacing a damp and dated 1980s kitchen with new, modern units; turning a cloakroom into a ground floor bathroom; refitting a first floor family bathroom and sanding the parquet floor in the sitting room. They installed new light fittings, decorated throughout and furnished the property with a combination of new pieces and antiques to bring the interior up to date without compromising the character and integrity of the beautiful old building.

“There are so many original beams, fireplaces and floors that the character is embedded in the structure of the house, and we didn’t want to overshadow that with too much modern furniture,” says Carl. ‘If I had been left to my own devices I would have filled the whole house with furniture and accessories of the period but, as Rachel quite rightly reminded me, it’s not a theme park.’

Even so, they still agonised over the colour of the sitting room walls before finally choosing French Turquoise from Craig and Rose, which took hours to apply as they followed the irregular contours of the ancient posts and beams.

And such attention to detail is evident throughout the house.

When they replaced the rotting bathroom floor with oak boards, for example, they used copper nails to fix it into place, and they also used copper piping to conceal wires so that wall lights could be mounted without having to chase cables into the fabric of the building.

“It is important to let an old house like this breathe naturally, so we tried to include as many natural materials as possible in our fixtures, fittings and furniture,” says Carl.

They also wanted to incorporate modern details that reflected the property’s Medieval history, hence the choice of modern kitchen floor tiles which resemble a classic Medieval ceiling pattern. Modern Wren units and natural wood worktops have been mixed with copper appliances and rustic shelves from The Farthing.

In the sitting room a Carron wood burning stove sits in a fireplace which was occupied by a Sixties gas fire sitting on reinforced concrete when Carl and Rachel bought the house.

One of their most exciting discoveries was the ancient Order of the Garter symbol sitting in a frame over the mantle. Carl is still researching its origins. He also made coffee tables using surplus oak boards from the bathroom floor fixed to a gold painted metal frame.

On the ground floor an old cloakroom has been transformed into a ground floor bathroom featuring a Hurlingham copper bath, bought second hand for just £700 from Newark Antique Fair. Carl laid the oak floor and made the taps himself, from moulded copper piping.

In the dining room the beautiful wall panelling is believed to be 300 years old and is slowly being compressed by the movement of the old house, while one of the bedrooms has a beautiful old bowed wall.

The ‘elephant in the room’ was the gable end – part of the original 15th century building which is so structurally insecure and bowing so dramatically that it will cost a ‘small fortune’ to fix – a mammoth task which is next on Carl’s ‘to-do’ list. “We have run out of money, so we are going to have to save up for this next phase,” says Carl. “We are looking at the possibility of grants or even crowd funding for this because we feel it’s such an important building and needs preserving for future generations.” Although movement in the house is slow, it is enough to have become a problem that needs fixing. “The late 17th century wood panelling on the dining room walls, for example, is becoming compressed and the general knock-on effect of the bowing gable end will have a detrimental effect on the house as a whole.”

With the property’s rare ‘star’-rated listing, Carl and Rachel have worked closely with the SPAB (The Society for the Protection of Ancient Buildings) to make sure everything they have done has been carried out correctly and to SPAB guidelines. Carl even enlisted on a couple of courses on the protection and renovation of old buildings to make sure they were not doing more harm than good during the renovation process. He has also spent hours researching the history of the house, so he can understand as much as possible about its heritage, such as the 16th century wall painting.

“We are still having to pinch ourselves to remind ourselves that the house is ours,’ says Carl. ‘I must admit that in the days following the purchase I did wonder what on earth we had done. I think the enormity and expense of the project hit home and it was quite terrifying, but now it’s up and running as an Airbnb, and we are getting lovely feedback from the people who stay here, we know it was the right thing to do. It’s an extraordinary and unique house, and we feel very privileged to own it.’

Generally speaking, anyone who owns a listed home has to negotiate legal restrictions in the way a house is altered or renovated, and apply extra care to ensure it is preserved appropriately. There are laws that govern what you can and can’t do both externally and internally, but you can still make some alterations and extensions. This must, however, be done with the explicit consent of your local authority. Local authorities will consider the building’s function, condition and viability – some need a lot of work – against their historical significance. Listed building consent allows them to make these decisions fairly, considering all factors. 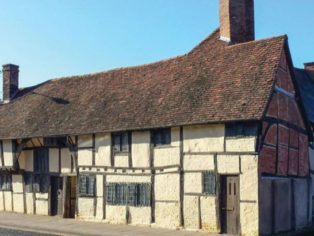