Modern advances have enabled today’s paints to offer fresh potential for creating new façade design possibilities. Kevin Davies, Technical Manager of Sto UK, looks at some of the benefits which the latest developments offer to selfbuilders.

In contrast to previous times, selfbuilders are now giving as much consideration to the paints and surface finishes used on their buildings as they give to the types of cladding and render systems they choose.  The reasons for this are not surprising when you consider the many exciting paint and finish technologies that have emerged in the past few years.

One of the most effective of these is based on a technology borrowed from nature. This has allowed the creation of a façade paint that features a special composition of binding agents and filler material which recreates the micro-textures that are found on the shell of the fog-basking beetle. The micro-textured surface of this façade paint simultaneously repels water and channels it away to run off the surface. As a result, the façade is able to dry rapidly, preventing the growth of any micro-organisms on the surface and so significantly reducing the risk of stains or marks appearing on the surface of your property.

Proving that beauty is more than skin deep, this type of façade paint is available in a very wide range of colours and provides great colour stability, and so it allows you to create a striking and unusual appearance for your new home, which will continue to look good for longer.

Retaining a building façade’s ‘just built’ appearance has traditionally been a demanding task for homeowners, but fortunately today’s technology can help. This is thanks to modern dirt-removing façade paints which are designed to prevent water and dirt clinging to the surface.

This type of paint recreates the natural self-cleaning effect of the lotus plant, which forces rainwater to run off in droplets and carry dirt particles away from the surface in the process. The façade is effectively ‘washed clean’ every time it rains, and once again this will help your new home retain its original appearance far longer than a conventional finish. It can also be used to coat both old and new renders with equal success, so it’s an attractive proposition whether yours is a new-build or refurbishment project.

Another recent development which has helped modern façade paints to gain greater prominence is their compatibility with a far wider range of colour options than their predecessors. Traditional façade paints have often limited the use of very dark colour render finishes over external wall insulation, as the render would absorb solar heat, with temperatures of up to 80°C being reached, resulting in dimensional instability and cracking.

Fortunately, some modern façade paints can eliminate this problem, thanks to the use of special black pigments that reflect much of the solar energy in the near-infrared spectrum. This allows render surfaces to be dark in colour, but still remain cool enough to protect the render, and the insulation underneath, from the effects of thermal stress. In this way, modern render paints can open up a whole new world of design possibilities for selfbuilders.

So the next time you’re considering a façade finish for your latest project, it’s worth remembering that your options today are almost unlimited. Speak to a manufacturer who can offer a really comprehensive range of proven and practical finishes, and the façade that you create for your new home could take on a whole new eye-catching appearance. 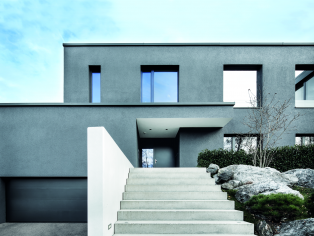