Having outgrown their current home, Daniela and Duncan Forbes were hunting for a property for their family that they could put their stamp on with an architect’s help, and they found it in Edinburgh

The main appeal of the property, in the Cramond area of Edinburgh, was its outdoor space, as Daniela explains: “We fell in love with the garden. The house was detached, and there was a lot of space around it. Although it needed a lot of things done to it, we could visualise living here.” The location was good too, although the couple were a bit apprehensive about living under the flight path with the house being close to Edinburgh Airport. On the plus side however, it was close to town, close to the beach, and close to family while not living in each other’s pockets, and the local schools had a good reputation too.

Purchasing in May 2018, Daniela and Duncan took ownership at the end of July. “When we got the keys, we decided we would do the work we absolutely had to do and didn’t move in for a few weeks.” The three upstairs bedrooms were redecorated, along with the upstairs hallway. The dated wallpaper, carpets and curtains were removed, and the doors stripped back. The walls were then skimmed and painted, new carpets were laid, and new blinds fitted. The bathroom had a quick makeover, with basic vinyl flooring replacing the old carpet, and then the family was ready to move in.

“Our plan was to live in the house for a couple of months and then look at how we could make it work better for us. We got a feel for the space, found out where the sun came in and where we tended to spend most of our time.” It became apparent very quickly that the only rooms that had a view of the garden were the utility which had one large window, and the sunroom which offered a sidelong glimpse. Fortunately, the Forbes’ already had an architect friend on hand to help, having already enlisted Neil Taylor of TAP Architecture to “give us his thoughts and draw up plans for.” Daniela adds: “He had designed an extension for a mutual friend’s house, and we loved it.”

The original layout of the house consisted of a dark kitchen at the front and an L-shaped sitting room which led into an uninsulated sunroom at the side of the property. The utility and dining room were in the middle with the dining room leading out to a conservatory. Upstairs there were three bedrooms and a family bathroom.

While there was a lot of space, they didn’t gel with the house. The conservatory was never used, as it wasn’t particularly welcoming and didn’t connect with the house or garden. The sitting room was old fashioned and had a brick mantelpiece that ran the length of the wall, with a gas fire and a tiny little window that opened onto the sunroom and an alcove through to the dining room. “It was a large room, but you never quite knew where to sit,” Daniela recalls.

With Daniela using the kitchen as a workspace in her role as a professional cook and catering consultant, the kitchen needed to perform at a commercial level as well as a domestic one. “The kitchen was in the darkest corner of the house, and spending most of my day in the kitchen, that wasn’t somewhere I wanted to work.”

The couple’s wish list was straightforward, however, achieving it was anything but. This wasn’t a case of simply adding an extension on the back of the house; their requests required an entire remodel of the ground floor, which Neil was happy to offer them. At the top of the list was to put the kitchen at the heart of the home, and also to link it with the main living space which should be open plan with views out to the

garden. An additional bedroom and ensuite were also required, along with a snug for the kids to watch movies and entertain friends, and could double up as extra bedroom/living space if required. Lastly and most importantly, the whole ground floor had to flow and have an obvious and natural connection with the garden, as well as a wow factor.

Neil’s first suggestion was to get rid of both the conservatory and sunroom as they were both poorly insulated and badly constructed, and replace them with a new extension. As there was no way to add another bedroom upstairs, he had to come up with a way to incorporate one on the ground floor.

“Neil did some fantastic drawings playing around with various configurations as to what should go in the extension and what could be incorporated into the existing house,” says Daniella. The final design put the new fourth bedroom – which was to be Daniela’s and Duncan’s – at the front of the house with views over a courtyard space where the sunroom used to be. The old kitchen became the snug connected to a new shower room with sliding doors to maximise the space. The utility room was retained and kitted out as Daniela’s work and storage space with floor to ceiling cupboards to house her appliances and general kitchen clutter. In the middle of the house, the dining room has been transformed into a contemporary kitchen with an internal glazed screen partially closing it off from the main living/dining area in the new extension.

With Daniela using the kitchen as a workspace, it needed to be easy to clean and offer lots of surface space. By customising basic IKEA units with stainless steel worktops and splashbacks the look is modern but practical, with the glass partition offering a degree of separation when she’s working – while ensuring it’s still very much a family space.

“It’s surprising because footprint-wise we haven’t gained that much, but we have achieved so much in terms of a layout which seems more natural, and which makes use of every inch of space,” says Daniela. “We couldn’t incorporate an ensuite, but what we have now is actually better which is a separate shower room that guests can use too.”

The connection with the garden has also been re-established, much to the couple’s delight. The common trend for fitting bifold doors was quickly discounted, due to plane noise, the inclement Scottish climate, and the fact they weren’t particularly interested in inside-outside blending. “If it’s nice weather, we spend our time in the garden, not in the sitting room,” says Daniela. “We have an area in the garden for morning coffee, late afternoon pizzas and barbecues and then evenings are spent under the apple tree; we use all the space.”

The glazed wall that was fitted instead is a major success. “I love having this exceptionally large pane of glass with an uninterrupted view over the garden. With the grass planted right up to the glass, it’s almost seamless, and it’s so much better for soundproofing as there are periods of the day when we have planes flying over every two or three minutes.”

The last thing on the wish list was the wow factor and on this, Neil has certainly delivered. “Neil brought to the table the really interesting architectural touches that we wouldn’t have thought about.” This included features such as the floating ceiling in the living area, with the lights “hidden around it,” as well as “the shape of the ceiling itself, lots of little touches.” She adds: “Then of course there’s the cladding.”

Neil’s solution to tie the new extension in with the existing building was to take inspiration from the property’s original exterior – a fake stone facade that had been grafted onto the front of the house. The idea of a green planted elevation started to present itself, and while some clients would have been quite cautious about something so different, Neil was convinced that Daniela and Duncan would be keen to explore the idea, and they were.

“We were surprised with what Neil came up with, but pleasantly so. It’s unusual and it’s something we would never have thought of, but I’m really pleased that we took a bit of a risk and went with it.” Designing the cladding took time and evolved in an organic way with Neil taking his clients through it one step at a time, exploring what would work and what was affordable. “The first design included using aged copper, but it was prohibitively expensive, and that’s when we looked at using aluminium instead.”

To encourage planting to grow around the extension but not harm the building Neil’s solution was to wrap the rear and side facade of the extension in a perforated aluminium mesh which is powder coated in a punchy aqua shade. The mesh is attached to the concrete block walls with long bolts, keeping it 50 mm away from the walls. The choice of concrete walls provides a robust backing, avoiding long term maintenance issues, and also adds another layer of soundproofing to the timber frame and plasterboard finish inside. As plants grow over the new exterior, the connection between inside and outside will become ever less obvious.

Since the remodel was completed in August 2019 the new layout has been a big hit with everyone in the family, especially during lockdown. “The kids (now 10 and 8) call the spare bedroom “the Zoom room,” Daniela explains, “And, thank goodness we have one.

Of course, having all this outdoor space that we now connect with has been a huge bonus. All in all, it’s been a successful project.”

Taking about eight months to complete and with an overspend of about 15% which included renewing all the brown dated windows, the couple are pleased with the result. “It really helped that we had a good relationship with Neil and James at Ramsay Built, the contractor; he was really organised. It was quite stressful, but these things always are, and it was only for quite a short period of time. I think for what we did, it was achieved quite quickly, and I think we got a lot for our money. Next on the list is the renovation of the upstairs bathroom and there are a few things we’d like to do in the garden. The garden is so beautiful and mature, we’re a bit scared to do anything in case we muck it up!” 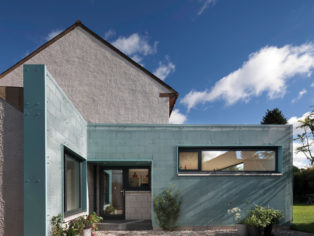 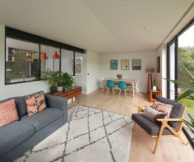 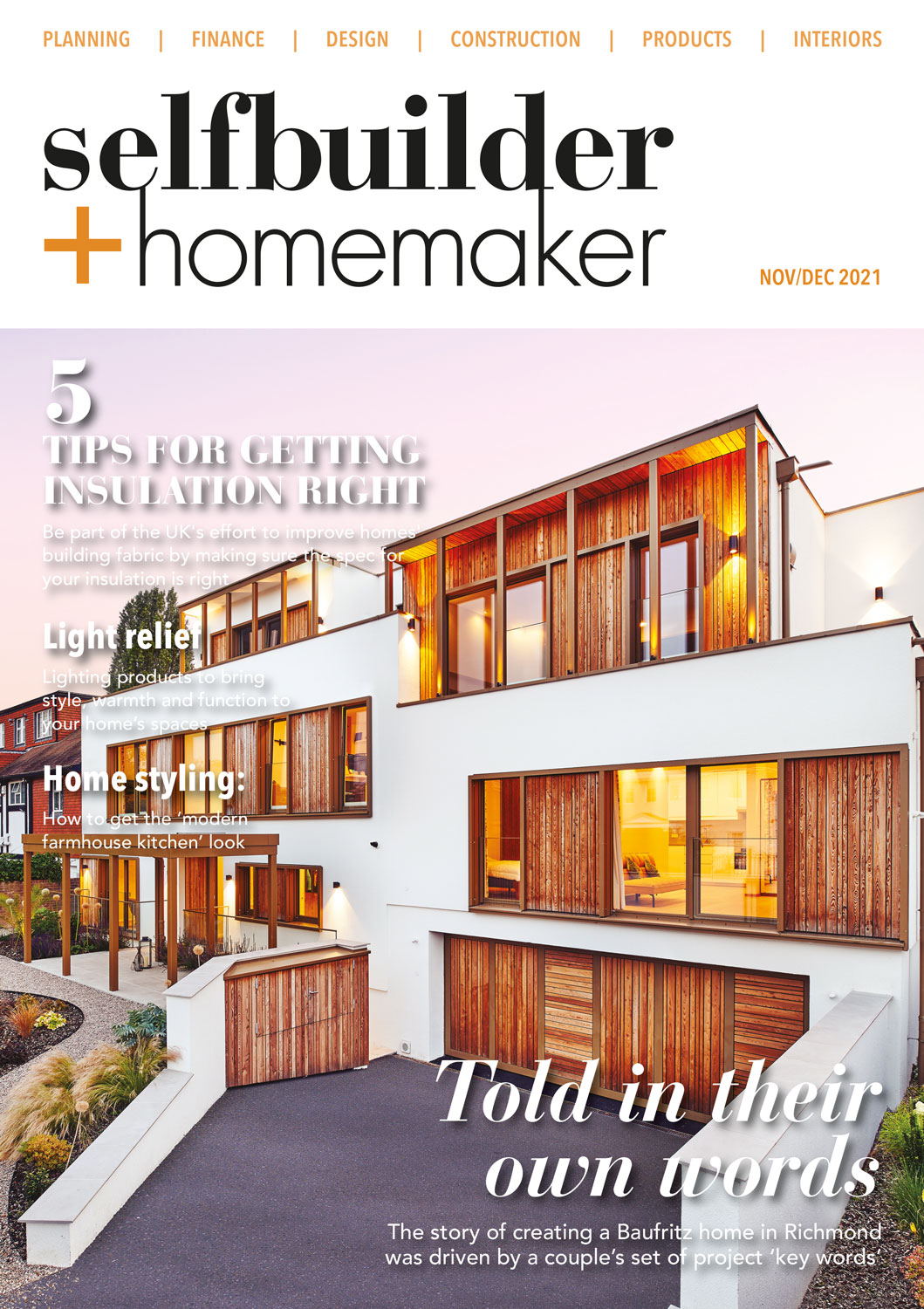 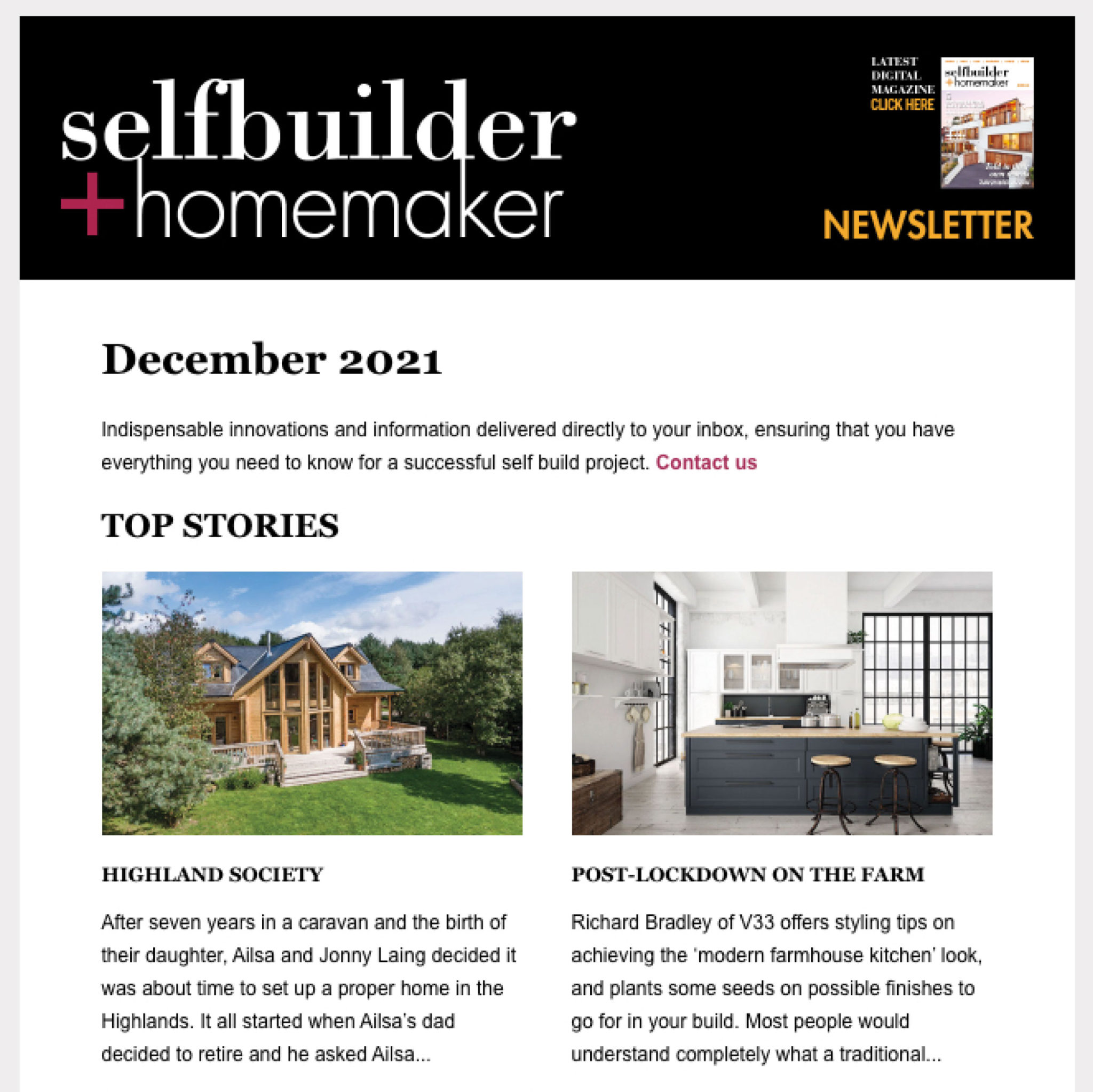