Originally a 1930s build, the property sits in the middle of a terrace row, typical of the South London properties in the area. The property was previously converted into two separate flats and the owner commissioned Steve Adams Architects to restore the building to a single home. The project hoped to renovate the property, restoring the building to its original orientation while preserving the period features of the property.

Having fallen into a dilapidated state, the building needed significant work to improve both the appearance and environmental performance of the building. The property required stripping back to the core shell and was extended at the rear and in the roof. The project took six months to complete beginning in July 2018 with AAM Maintenance leading the construction work.

The existing three bedrooms on the second floor were renovated and a stylish bathroom installed. In order to expand the property, the redevelopment utilised the existing loft space, converting it into a fourth bedroom and en-suite bathroom. The loft conversion also allowed for new roof insulation to be installed. This combined with the new double-glazed windows and heating system installed throughout the building vastly improved the property’s environmental performance.

Given the property had previously been split into two homes, the downstairs living area needed to be redesigned into a family home. The rear extension, expanded the kitchen and dining area into a large and sophisticated living space. The front living room was renovated, and the distinct curved bay window restored to leave a large bright and open space.

The living room opens out into the expanded kitchen forming a large entertaining space. Underfloor heating was installed throughout the ground floor this classic grey tiles run through the entire downstairs living space.

The contemporary, modern style is reflected with the greyscale theme in the kitchen and upstairs living areas. The units are placed along one side of the kitchen to maximise the entertaining space while still providing excellent storage and access to the pre-installed appliances. This space is further enhanced by the large bi-folding doors that open into the tiered garden area. Being a south facing garden, the kitchen area benefits from natural sunlight throughout the day.

Externally, the front façade of the building was restored to match neighbouring properties and the rear garden landscaped to a condition suitable for a young family. 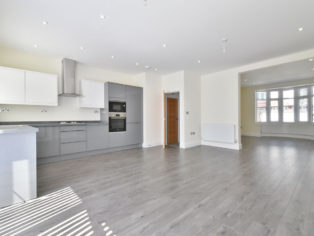