A new lease of life

When David and Martin Ratcliff set about adding a top-floor extension to their handsome Victorian terraced house in South West London, they had no idea their project would end up taking such a different path

After successfully renovating a property in the heart of Soho, David and Martin Ratcliff purchased a three-storey Victorian terraced house on an exclusive road in south west London. They knew before they secured the deal that they had the ambition and eye for detail required to bring the once grand home back to its former glory.

The couple decided to complete the internal makeover before moving in, and turned to Ruta Benetyte of Vita Architecture to produce a design. Their initial aim was relatively simple; to spruce up the interior and add a rooftop hub and terrace to the top floor. “This simple extension would provide an extra bedroom, while the terrace would allow us to make the most of our north-west orientation,” David explains.

Their brief to Ruta was for a clean and simple design that maintained the original aesthetic of the house, while enhancing its refined features. From ornate corning to wrought-iron radiators and hardwood floors, there was already plenty to admire about this period property. “We wanted the remodel to have longevity,” Martin says. “The space needed to continue to look fantastic for years to come.” For this to work, they needed to focus on specifying high quality materials with careful detailing. The project had to be about perfecting what was already there, without cutting corners.

However, as the design process got underway everyone involved began to realise that something just wasn’t right about the layout of the house. “We knew that if we wanted to get the refurbishment right first time, much more work needed to be done,” Ruta explains.

The existing ground-floor extension had an unsightly and old-fashioned roof lantern and the home’s oversized windows were overpowering the internal spaces. It was also convoluted in terms of layout, with a number of ceiling levels and structural elements exposed in a problematic way. “We had to find a way to tidy up and simplify the layout of the ground floor,” David explains.

On the top floor, the layout didn’t function well; there was no real flow between each living zone. Coming to a decision together, David, Martin and Ruta decided the whole house needed to be reconsidered. “We all agreed that it just wasn’t worth adding something beautiful upstairs, when the rest of the house wasn’t working,” says Ruta.

The project quickly became much more allencompassing and the team began looking at how to bring the whole house together. The changes would all be aesthetic, making the planning and design process that little bit smoother. “The aim now was to remove all the aspects of the house that would become troublesome later down the line,” Ruta says. “We decided to take a wider approach and began designing a complete facelift that would include garden landscaping, the remodelling of the existing rear extension, a ground-floor refurbishment and reconfiguration of the first and second floors.”

Working together on the design, the group met regularly to hone their ideas. David and Martin had plenty of thoughts about what they wanted, but were also keen to take on suggestions from Ruta. Their focus was on creating a seamless design that would work for years to come. The key to the design was to create internal spaces that were arranged in a comfortable way. Every aspect needed to flow together effortlessly.

Since the house is located in a Conservation Area, formed from prominent Victorian residences, any exterior details needed to be considered carefully. So, instead of leaving conversations with the local planning department until last, Ruta included them in every aspect of the design process. “We knew the rooftop pod and terrace would need to meet certain criteria,” she explains. “With period properties, keeping your design sympathetic to the surrounding architecture is extremely important, and is really the best way to obtain planning consent without challenge.”

The process required the team to communicate and work closely with the council, to meet their aesthetic and size requirements. “The conversations we had allowed us to express what we were looking to achieve, but also ensured we didn’t need to compromise on the finishes and overall look of the design,” says Ruta.

They were told that the rooftop pod needed to be a similar size and style to the one found next door. This way, the retreat wouldn’t cause privacy issues or affect the surrounding vernacular. Since the existing three-storey terraced property had a striking brick facade, the new addition also needed to seamlessly tie in with this classic look.

The planning stage definitely required some give-and-take. “We wanted to build the rooftop pod with straight lines, but we were told to create a sloped side in a mansard style, to match the rear extension on the ground floor,” Ruta says. “As long as you aim for a high quality and sensitive finish councils don’t usually object, so we weren’t really challenged on anything too much.”

Thanks to this open dialogue, the team obtained planning consent quickly. They provided reasoning for their design choices, highlighting how they would enhance the building. “This was something the council were open to working with us on,” David says. “We created a concise design that tied in beautifully with the surrounding area. Luckily, the authorities agreed to a number of details that would otherwise have compromised the overall finish of the build.”

After obtaining the go-ahead, work could get started. Although the approved plans incorporated a reconfiguration of the first and second floors, as well as a rooftop pod and terrace, minimal structural work was needed. The biggest job was reducing the size of the original windows and replacing the oldfashioned lantern in the existing kitchen with something more streamlined.

For the glazing, Ruta opted for steel-framed, Crittall-inspired designs from Fabco and Smart Aluminium Constructions. With barely-there edging and a contemporary finish, there is also something elegant and timeless about this type of glazing product.

The refurbishment team collaborated with a shared aim: to create a beautiful home with a premium finish. David and Martin selected contractors they knew, and had worked with before, which enabled the project to run smoothly. Remarkably, no great difficulties cropped up and any challenges that arose were tackled by the team as a whole.

This success is something Ruta puts down to two things. “Communication is key to making the renovation process easy, and we remained very open and honest with one another along the way,” she says. “David and Martin were also incredibly responsive and were quick to make decisions and stick with them.”

The project began in July 2019 and was completed by October 2020. Beautifully put together, the home is an exhibition of elegant materials and refined period features. Every new element was selected for its longevity, complementing the character of the existing building while giving it that touch of finesse.

Ruta opted for a palette of zinc, brick, glass and steel, with a mix of tactile but hard-wearing materials internally. Throughout, there is a minimal colour scheme with pops of metal and warm timber accents. Every space is a celebration of the splendour of the Victorian era, and its ornate period details have been lovingly restored. The new steel frame doors beautifully tie in with the zinc cladding that decorates the rear facade, a product that is 100 per cent recyclable at end-of-life.

In the original ground-floor extension, the space has been opened up to create a seamless room that can be used for cooking, dining, entertaining and relaxing. Certain elements break up the room subtly, providing zones for different tasks. The new glazing has also helped to enhance the space. The aged roof lantern has been replaced by a large, custom box skylight with a minimal frame. The rest of the ground floor was thoroughly refurbished, too, with timber wall panels and integrated joinery that gives a sleek finish.

Beautiful glass doors lead out to the newly landscaped garden. Tranquil and elegant, it feels like an extension of the internal living space. The area is David and Martin’s favourite part of the house – it was completely reconfigured to provide a better link with their new extension.

The biggest changes took place on the upper floors of the house, however. On both levels, two medium-sized bedrooms were combined to create generously proportioned suites with plenty of natural light. On the first floor is a master suite with a dedicated walk-in wardrobe and shower room, finished with Venetian plaster and Fabco steel doors that are replicated elsewhere in the house.

Above, on the second floor, two more bedrooms can be found, one in its very own rooftop ‘pod’. “The pod room leads out to a private terrace, which grounds the room beautifully,” Martin says. “It has contemporary zinc cladding, which is beautifully detailed and wraps around the whole top floor.”

David and Martin were closely involved with the specification of all the elements of the refurbishment, resulting in spaces that will work for them now, and in the years to come. “Thanks to their impeccable tastes, the finishes are sophisticated in an understated way,” Ruta says. “There are no loud details, and the quality speaks for itself.” 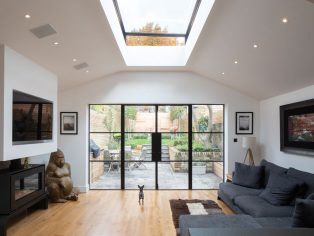