A chalet for all seasons

Christa and Del Dobson had been planning their alpine-style project for nearly 20 years, and it has finally come to fruition in a luxurious off-grid chalet

Although Christa grew up in England, her mother’s family hail from the German/Austrian border and the influence of the Alps has been prevalent throughout her life. When she met Del, he shared her passion and the couple opened two alpine shops in Bath. One specialising in interiors and the other in clothing.

“It was always our plan to do what we’re doing now,” Christa explains. “We wanted to have a really small bed and breakfast, a small shop and a beautiful chalet. The chalet was always part of the plan but not necessarily to build it ourselves!” About eight years ago, they were made an offer on the shops that was “really too good to turn down,” but the buyer pulled out.

By that point, says Christa, “we’d already started the ball rolling to move. We didn’t know where we wanted to go, we just knew what we were looking for.” She explains further: “It had to be remote but not overly so, and on a main road but not a busy one. It was difficult to find the right place; we looked all over the UK.” About 18 months after they started their search, they found a house in the Scottish Borders, which was “perfect.”

Originally owned by Jedburgh Abbey, Singdean was a small ‘steading’ (farmstead), located on a larger sheep farm, until the 1950s. When Christa and Del bought it eight years ago they changed the main house into a bed and breakfast and the small barn into an alpine shop. Two years ago, they realised the last part of their dream – creating a stand-alone, alpine chalet in the former paddock.

The couple contacted their architect, Ray Cherry, a couple of years before they started the build – as he had already worked on the plans for their shop. However, at that point he was too busy, and they weren’t ready financially. “When we were ready, Ray was still super busy, but as he’d already been to the site, met us and knew how we lived he agreed after a brief chat on the phone to send us a quick sketch.” He emailed it over, and “that was it,” says Christa – “he’d completely understood what we were looking for. He basically drew what was in my head – a luxury bothy .”

While planning was straightforward, it still took a year to come through and was granted under the ‘rural tourism’ umbrella which means that the chalet can only be sold along with the house, not as a separate entity.

“It took a year to build, and we finished it in May 2019. We’re very, very happy with it. When you’ve been dreaming about something for so long, it’s quite nerve wracking when you come to do it, in case it doesn’t live up to expectations.

The relatively simple layout is designed for couples who want to escape – one bedroom, a large bathroom, a cosy seating area, and a kitchen. However, despite its simplicity, Christa and Del soon realised that their budget wasn’t going to go very far.

“We had a budget, but it was a bit optimistic. It was very carefully researched over several months and I completely and utterly believed in it, but I underestimated things like the price of screws and how many we’d need – and that was crazy money,” says Christa. “The price of insulation went through the roof because of a fire in Germany. The insulation company had to ramp up their production in different parts of the factory, which meant their machines broke because they were working too hard, and the price went up by about a third. And then waiting time went up too; it was things we couldn’t plan for.”

Fortunately, the couple’s builder, John Elliott from Newcastleton, was flexible in his approach, which eased the pressure on the budget; he had already worked with the couple on their own house. “We had them do the important, difficult bits such as the foundations, drainage, the timber frame, basically any big tasks that required significant machinery.”

When they realised their budget wasn’t going to extend to the builder taking on everything, “Del and I rolled up our sleeves and did what we could, when we could.” She adds: “John was great; it was a case of ‘there’s plenty here you can do yourselves but I’m here when you need me.’ It’s a difficult way to do a project but it’s a lovely thing to do as well.”

With hindsight, Christa can look back fondly on the build, but she explains that in the thick of it, it was a different matter. “I don’t quite know how we did it. We had all the structural drawings, we understood them, and we knew what we had to do but the physical aspect of it was tough.

“I think we counted nine separate layers around the whole of the property that had to be applied within the walls, but the plasterboarding was definitely the most difficult and horrible job,” she says. “Del and I struggled because the ceilings are so high and balancing the boards on your head while trying to screw them in is just exhausting.” The weather didn’t help either as the bulk of the build took place in winter and being off grid, they had to run everything off one very long extension lead.

Then there was the added complication of the B&B, which the couple were still running in tandem with the chalet build. “Time was our biggest enemy. Guests can arrive from 3 pm and at 2.30 pm, looking like a feral, wild thing, I’d try to finish what I was doing on the chalet, get changed, brush my hair and get ready to welcome our guests. Trying to squeeze the build into these few hours was difficult; our guests come for peace and quiet – we couldn’t be hammering and drilling when anyone was staying.”

Eventually, Del and Christa tried to book two weeks off to focus on the chalet, but didn’t feel they could cancel a weekend booking in the middle. “We were in the process of digging the drainage for the septic tank, we’d just had a huge gravel delivery, and the site looked like a bomb had gone off. Three builders plus Del and I made a mammoth effort to make it all look pristine for the guests, and at the end of the weekend we pulled it all apart again!”

GETTING THE DETAILS RIGHT

Internally, the couple have worked just as hard to build their alpine dream right down to the burnt larch that extends throughout the chalet. “Each piece of larch has been handled several times. Charring the wood took months but any piece of wood you touch, you can feel the grain much more than you can normally. We’ve made every bit of this building beautiful.”

It’s not just the larch, Christa and Del have been collecting for the chalet for nearly 10 years, and every room, accessory and detail has been carefully considered. “The chalet has been in our heads for so long when it came to the finishing touches it was more a case of implementing them than planning them. For example, we knew we didn’t want a statement kitchen, it had to have the same feeling as the rest of the house.” The black doors are simple MDF with leather handles, there’s a slate splashback, and more wood. “It’s designed to complement the rest of the house.”

The bathroom required a bit more thought to achieve a natural look that would survive moisture and to ensure it looked rustic, but felt luxurious. It has a huge walk-in shower and bath but the smaller details that Christa loves include the antler towel rails and river stone sink. “The whole chalet oozes luxury, but the kind where you don’t have to take your shoes off. We don’t do egos here!”

Guests can also take some of that luxury home with them as the chalet contains many alpine lifestyle pieces, clothes, jewellery and handmade essential oils that the couple stock in their shop. “There’s a diffuser that Del makes and sells and it’s in the chalet for guests to use too.”

Not for sale are many things that Christa grew up with or sourced on a visit to see her family. “There are old sledges that I had when I was a child and that we’ve reused as a bedside table, and there’ve been a lot of instances when we were ordering for the shop that an extra piece was added for the chalet.”

The chalet also ticks all its eco credentials following in the footsteps of the rest of Singdean by being completely off grid. “The chalet has solar panels and is heated by a biomass boiler. However, the insulation is so good, we’ve hardly had the heating on.” Water comes from a private spring and electricity is stored in a large battery bank with generator backup. The couple is also about to install a small wind turbine “which we’re really excited about.”

It appears that Alpnhaus does have everything one could wish for and more besides, including a wood fired hot tub is perfect for relaxing under the stars. The building has also been designed so that it can be enjoyed whatever the weather. “What I especially love is the balcony,” says Christa. “It’s huge and has a massive overhang which means it’s incredibly sheltered but still has an amazing view.” This is a building that can withstand all weathers: “in the Scottish borders, we sometimes get every season in one day. It had to be strong and protective, and it’s a big strong hug of a place.”

After 18 months, the house that Christa and Del built is certainly strong and solid, and as a project does the couple great justice. How do they feel about the whole experience, and what have they learned? “I’ve done it once, and it’s incredible and amazing,” says Christa.

She concludes: “I’m of the opinion that if someone can do it, then I can do it. During this project I’ve learned that’s not always the case, but I’ll always give it a try. Now whatever life throws at us, we’re like, ‘we can handle that, we built a chalet!’” 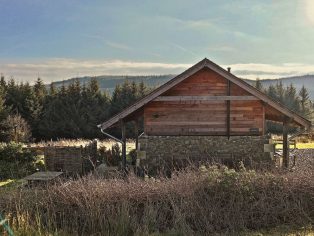 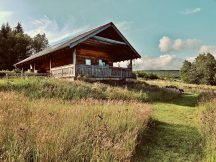 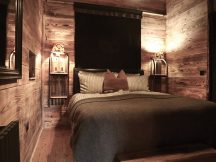 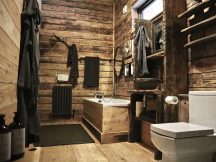 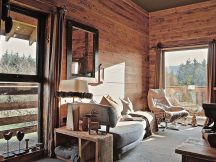