An eco-afficionado achieved his dream to create a Passivhaus home in Leeds, but it had to be traditional in style so wasn’t plain sailing

As a solicitor by profession, Stephen Cirell took a very methodical approach to planning his first self-build, and to his quiet pride it has ended up breaking two records. It’s not only the first such eco-project in the Leeds area to be officially registered by the Germany-based Passivhaus Institute, it’s also the 1,000th Passivhaus unit certified in the UK.

His immediate challenge was to find a plot, so he started out by drawing up a map with a one and a half circumference around where he lived in Roundhay in north Leeds, West Yorkshire. Eventually, he came across the nearby small village of Wike, eight miles north of the city centre.

“It took me 15 months to crack it, so finding the right plot was high up there on the list of biggest challenges,” says Stephen, who started his quest to live in his own Passivhaus in January 2014 and completed his build in March 2017. “You get a bit disillusioned, all the time you’re looking at the clock, thinking that time is ticking on and you haven’t even got started yet.”

In the end, he saw an opportunity advertised by an estate agent. Another buyer had bought a large village site, renovating the barn, but opting to sell 40 per cent of the plot. This included the original home on the site – Old Forge Cottage, which was derelict. Part of the attraction was that the 0.24 acre plot, for which Stephen paid £400,000, already held a dwelling, so planning looked as if it would be relatively straightforward.

However, the planners wanted the complete opposite of what Stephen, 58, who works as a consultant on low energy and renewable energy projects, had in mind for his very personal project.

“I knew I wanted a Passivhaus, but I was imagining lots of angular glass and big open- plan spaces, very modern and contemporary in style,” he says. “But there were a number of strict local and green belt planning requirements which determined that the house’s design must be traditional. For example, the need to use Yorkshire stone, the requirement to have chimneys – even though we don’t use them – and the demand for there to be relatively small window openings.”

The planners at Leeds City Council basically argued for an exact replica of what was there before. “But no one builds a small two-bed cottage these days, as it isn’t cost effective,” Stephen explains. “So, my main battle was over size. But they also wanted something that fitted in with the village and the agricultural vernacular. They were very strict on this, for example, the roof in stone slate, hanging brackets for guttering, no fascia boards and so on.”

It took three laborious attempts to gain approval. In the end, the construction is of stone and breeze-block with a cavity packed with insulation, plus a trussed roof. The internal walls are plastered rather than plaster- boarded and following Passivhaus practice, all the joints in the house are taped to prevent draughts.

The Green Building Store, near Huddersfield in West Yorkshire, supplied the triple-glazed timber windows and doors and the MVHR heat recovery ventilation system and was a great source of information and inspiration for Stephen and his project team.

“We chose the Green Building Store because we had great confidence in their knowledge and expertise with Passivhaus projects,” says architect and Passivhaus designer Eric Parks, of Buckrose Ecological Architects in Malton, North Yorkshire. “The MVHR system is functioning really well and is virtually silent in operation.”

As Stephen wanted to eradicate his use of fossil fuels and Old Forge Cottage is off mains gas in any case, a Mitsubishi air source heat pump was chosen for the minimal heating and hot water requirements. There is just one radiator in the whole house – in the lounge.

Electricity is provided by a £6,000, 5 kW solar PV array in the garden, laid out on low level racking. The electricity from the panels can be diverted in four ways: to the house, to battery storage in the garage, to the heat store or to the grid.

It’s very innovative; if an appliance in the house needs power, that is supplied; if there is no call on the electricity, it is diverted to the 13.5 kWh Tesla Powerwall 2 battery. When the battery is fully charged, the power is diverted to the 300 litre water heat store, and when the water is heated to the maximum temperature, it is exported to the grid. This cascade system means that the maximum value from the solar power is extricated for every kWh generated.

“As a specialist in renewable energy and an active consultant in the industry, I wanted to create a high quality eco house,” says Stephen, whose air of modest authority suggests that he thoroughly enjoyed the process of planning the systems for his home. “The incorporation of renewable energy takes the house to another level – I’m aiming for a ‘no bills’ house. The operation of the smart system will be monitored over the next twelve months to see how this system is developing.”

Architect Eric says that achieving Passivhaus within the limiting planning restrictions on the external appearance represented an interesting balancing act: “Larger windows were out of the question, so the smaller areas of glazing and increased length of window frames and mullions meant lower solar gains and slightly more heat loss. This was balanced by a combination of increased levels of insulation in the roof and internally insulating the outward-opening window frames.”

Finding an architect and a builder conversant with Passivhaus techniques within convenient travelling distance of the site was a priority; Stephen admits that there was quite a small pool of suitably-qualified possibilities, but he had no regrets whatsoever about the people he chose.

Starting in March 2016, the build itself only took 12 months from start to finish, quite an achievement for a Passivhaus of 158 m2. It cost £350,000, with Stephen selling his previous house and living in rented accommodation for the duration. Old Forge Cottage has now been valued at £750,000.

Did he get hands-on with the construction process? He laughs, saying, “No! I am a solicitor and not very practical. I stuck with the contracts, warranties and agreements, which is more
my bag!”

He credits his builder, I & C Watts of Harrogate, North Yorkshire, as an absolutely vital part of the success of the project: “The site foreman, Mark Thomason, was experienced and knew what he was doing from the start.”

He adds that the whole build team were “brilliant,” being highly experienced with five Passivhaus projects already under their tool-belts: “When the house was tested it got one of the highest ever air-tightness ratings. To comply, you have to get 0.6 and this house is 0.1.”

Such a protracted project required great reserves of patience from Stephen – and his elder daughter, 24-year-old hairdresser Daisy, who shares her father’s new house and loves its warmth and comfort – but he does credit his own professional background with providing him with the necessary project management skills and an ability to delegate areas of responsibility.

“My overall advice would be to make sure that you get the right advisors on board and let them do their jobs,” he says. “I got the experts to advise and guide us on the technical specification; I’m used to doing high level work and managing things. I know that people can save themselves an absolute fortune by doing various things themselves, but I had no intention of wading in and attempting to do the jobs of other professionals.”

However, Stephen does point out that he believes that the building industry as a whole needs to upskill in order to deliver homes which meet or approach Passivhaus standard on a grand scale: “The problem lies in the culture of the industry, and in the skills required to build this way. But I do think we will see a change for the better over the next 10 years.”

The reward for his patience is a light and airy modern home which from the outside, sits beautifully in the village alongside much older period properties built in traditional styles. What Stephen calls “the dark times,” when he didn’t have planning permission and had invested his money in an expensive plot, seem far behind as he sits in his kitchen overlooking the thriving garden, landscaped by renowned Yorkshire designer Sally Tierney.

“Sally had written a book on garden design and I called her up to discuss the project,” he says. “The garden was intended to fit with the village. It’s not quite done yet – the wildflower meadow to the side of the house has yet
be completed.”

Old Forge Cottage has three bedrooms plus an office, which could be converted into a further bedroom, and has been designed to create a low-fuss, minimal maintenance project for Stephen and Daisy. They have taken a minimalist approach, using products that contained no Formaldehyde, and sustainable timber – the architect willingly incorporated these into the specification.

A key reason for wanting a Passivhaus was to save money on bills. “The heating and lighting bills at my draughty old period house, with no cavity wall insulation and no double glazing, were £3,000 a year – this house should cost nothing to run,” Stephen explains. “I think this shows that Passivhaus and renewable energy sources are the way forward. It is what people want.”

And although Stephen says that he would never buy a plot of land in the green belt again – “this factor added over a year to my project and complicated it considerably. I didn’t have any problem with it being stone, and having the cottagey look, but we were arguing over the exact colour of the stone, the mortar, the fascia, the guttering, to a ridiculous level of detail” – he is very happy in his new home.

“I love it,” he says. “There is a real sense of wellbeing living in a Passivhaus which is difficult to explain to anyone who doesn’t. The fresh, filtered air, the low requirement for heating – it has not been on since January – and the quiet provided by the insulation are lovely.”

And despite the “dark times”, he would consider undertaking a self-build project again, with the aim of realising his dream to build a striking contemporary home next time. “Of course, I have learned a lot over the past few years,” he says. “The main thing is to plan it all thoroughly in advance and be resilient. You have to stick to it and accept there will be setbacks and it will probably take longer than you thought. Whilst it is by no means an impossible task, it is not easy or for the faint-hearted. You really do have to grit your teeth and stick at it.” 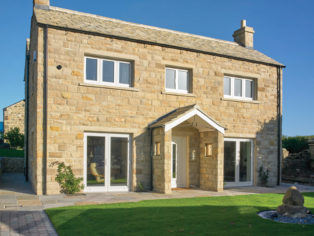 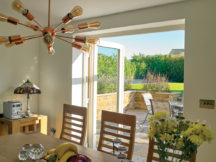 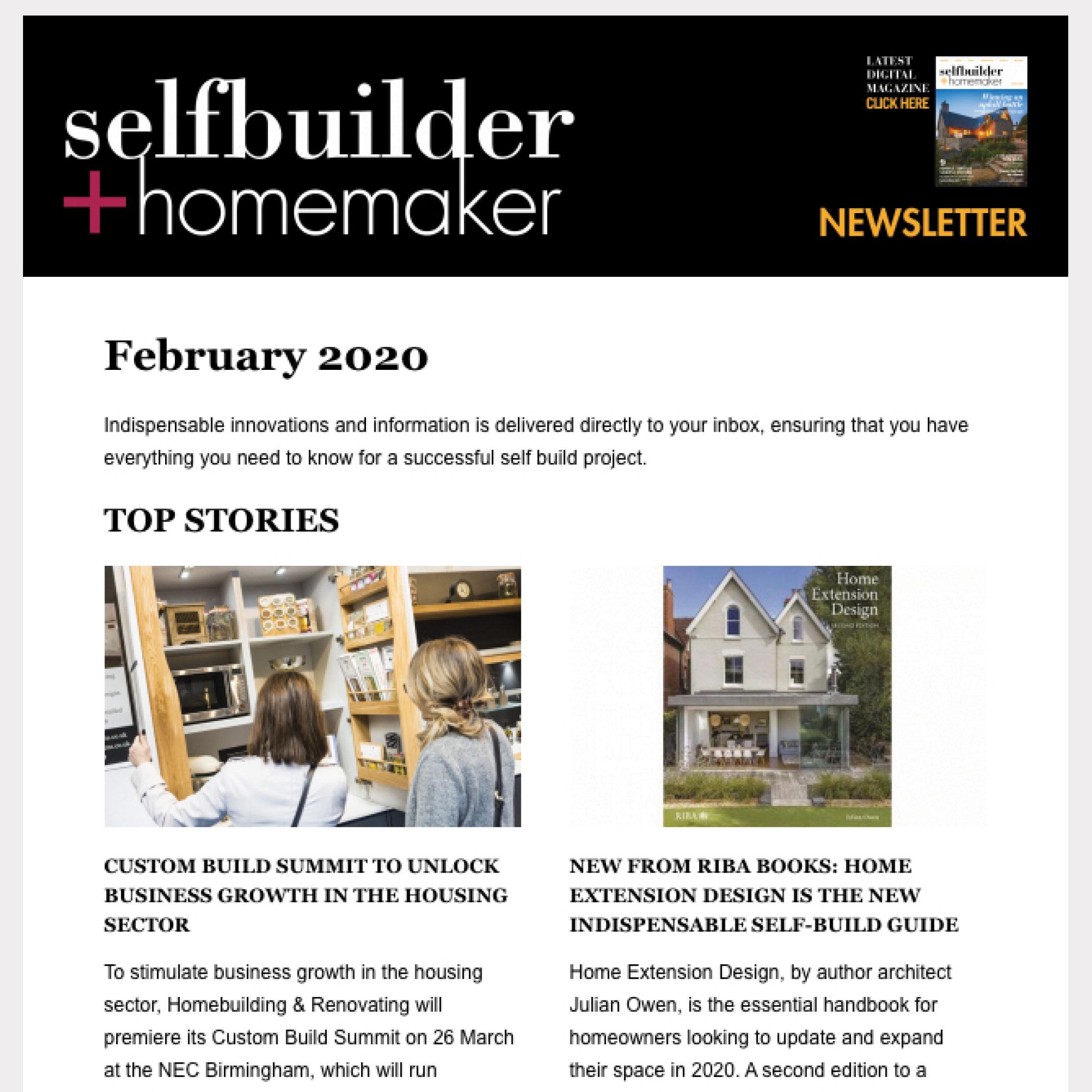