Top tips for the treatment of woodworm

Woodworm is actually a common furniture beetle. A wood-boring insect.

The destruction that an infestation causes can be traced to the larvae that dwell in timber and feed on it as a source of nutrition; boring huge, narrow tunnels.

When the larvae have grown in size, they transform into beetles, mate, and lay numerous eggs in the gallery of tunnels that they’ve built. Thereafter, they nibble away in search of another piece to colonise leaving an unusual flight hole – like a few millimetres in diameter – on the surface of the timber.

Although a chemical spray is commonly used to treat woodworm, the reality is that in most cases, the colony is already dead. Even when the infestation is real and active, sprays rarely work. This is because the chemical can hardly soak into the timber to any considerable depth. In short, this option works only for surface treatment.

The reason is that larvae stay deep inside the wood while the adults lay eggs in their galleries before emerging. It is indeed hard to reach them until the adults come out.

In short, spraying will have no significant effect on the infestation, as most of the emergent beetles will die without being sprayed with poisons.

These sprays contain chemicals that are a sort of insecticide. Meanwhile, recent restrictions on the use of chemicals have in a way weakened their potency. Furthermore, the fact is that this sort of solution involves spreading poisonous substances in your surroundings. This is not a reasonable way to treat the place that you and your family live.

You can easily control woodworm if you understand how they survive and multiply, especially their high dependency on water. They thrive where there is an abnormally high level of moisture in a building. That is, the infestation is very active mostly in moist areas.

New exit holes: Check these signs in flooring, furniture, and beams. Exit holes normally occur between May and October – the active season for woodworm.

Contrary to the belief that the holes indicate that the woodworm is no more there, there is a likelihood that the new larvae are in the wood.

Droppings or dust around the holes

This is often the first sign that occurs. Actually, it’s not dust, but a powdery residue in the form of droppings. It also looks like fine sawdust.

This is also one of the common signs of severe woodworm infestation.

Should You Call a Professional or Treat Woodworm Yourself?

If you notice an infestation by woodworm, it is advisable to seek the help of a reliable professional before having a go at treating woodworm issues using a DIY treatment. The reason is that though all woodworm might have the same signs to most people, different types of beetle have preferences for different types of wood. While some enjoy munching on hardwoods, others prefer loft beams. In essence, some cause more structural damage to woods than others do.

How to Deal With Damage

Woodworm hardly causes any damage to heartwood, so they are unable to attack such woods.

But modern timber, due to its composition of a high proportion of sapwood, is more vulnerable – and in case it is infested, little repair or reinforcement is enough as treatment.

You need not replace a timber that has been infected but whose structure is still very good. Likewise, don’t worry that the damage might spread to the unaffected wood. Note that dry timber is not vulnerable to attack; only damp timber can be attacked.

Note that most issues regarding skirting, joinery, and floorboards are cosmetic as stated earlier. Hence, whether the affected items need replacement or not is a matter of personal choice as well as the extent of the damage. 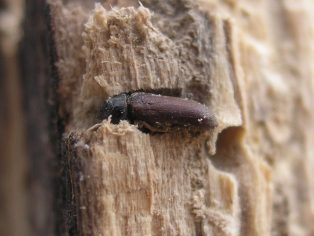