The capital city’s largest self-build event, The London Homebuilding & Renovating Show, sponsored by Anglian Home Improvements, (23-25 September, ExCeL, London) experienced a 11 per cent year on year increase in visitors and those questioned stated that they were prepared to spend up to £123,000 on their property plans despite the prediction that Brexit would cause uncertainty and slow down the market – a two per cent increase in spend from 2015.

More than 18 per cent of visitors said that their renovation or construction was underway and 44 per cent said it was due to commence within six months.

27 per cent of those questioned stated that they were undertaking a single or double extension, followed by 18 per cent who were carrying out a self or custom-build project. Other industries and topics of interest at the event were products and services for new kitchens (over 49 per cent); new bathroom, ensuite or shower room (more than 45 per cent) goods; flooring and floor structures (42 per cent), and lighting and electrical (just over 41 per cent) etc.

The London exhibition, which was hosted for the second consecutive year at the Docklands arena, attracted both men (51 per cent) and women (49 per cent) who are serious self-builders and renovators from Central London, the Home Counties and the East of England, with an average age of 51 years-old and an average income of £75k. 38 per cent stated that they don’t attend other competitor exhibitions, returning to The Homebuilding & Renovating Shows for invaluable resources and relevant guidance.

More than 350 specialist companies displayed their latest products and services to ensure that people attending the exhibition would be able to put theory into practice to bring life to a project, commence a build or complete a restoration.

‘Every year we aim to exceed our previous targets and diversify the offerings for our committed, dedicated visitors. Figures following our internal research proved once again that we’ve been successful in our approach to deliver all services and products required to start, progress or finalise a project, all under one roof and with A-Z guidance to hand. Another positive point to note is the consumer confidence which was witnessed at this show which was the first event post Brexit vote – we’ve noticed that visitors haven’t been perturbed by the referendum or changed their property plans and are continuing to work on their live projects, for which they have also put a higher budget aside. If we fuel this momentum, we’ll become a nation of self-builders, contributing proactively to increase the UK’s housing quota.’

‘The London Homebuilding & Renovating Show was the best exhibition for us so far, as we reached our highest number of leads per day in 12 years since exhibiting nationwide. We’re also very pleased with the quality of the consumers, as they had serious intentions of purchasing and were genuinely interested in the products.’

Next year’s London show will be held at ExCeL, London, from 22-24 September 2017. The next event is The Northern Homebuilding & Renovating Show which takes place from 4-6 November at HIC, Harrogate. For more information on upcoming exhibitions, visit www.homebuildingshow.co.uk. 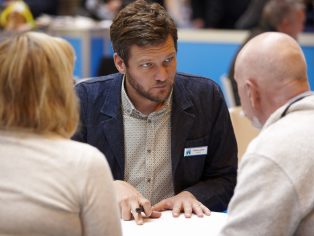