Good things come to those who wait

One of the most intimidating aspects of buying a plot of land and building your own house is worrying that you won’t like it when the last piece of the jigsaw finally falls into place, and you move in.

This wasn’t a problem for David and Deanna Martin, who now live in a striking self-build contemporary home in Emneth, near Wisbech, Norfolk.

Realising their dream to have a sustainable and stylish place to enjoy their retirement together started when they bought a 1,200 m2 plot of land next door to their existing home in 2004.

However, they took a number of years to carefully consider their first self-build project before embarking on it in earnest in August 2014, moving in February 2016.

“Our previous house was a Georgian farmhouse,” explains former primary school teacher Deanna. “It was lovely, with lots of period features, but it was costing a lot to maintain and to keep warm.”

“And the floors creaked!” says David, who worked as an agricultural consultant and is a keen gardener. “One of the first things we noticed about our new house was that the floors didn’t creak at all.”

The Martins had found themselves spending more and more time living in the conservatory at the back of their house and began to imagine what it might be like to have a home which opened up directly at the back to a garden.

They also enjoyed the natural light the conservatory brought in, and this began to inform their ideas of how they might want a new home to look. Also, they wanted to embrace the flexibility of integrated open-plan living rather than working around a series of smallish, unconnected period-style rooms as they currently were doing.

Their new home has three bedrooms, plus a study, garage, downstairs bathroom and an open-plan living/dining/kitchen area. On the first floor, reached by a hand-built oak and stainless steel open-tread staircase, there is a library area, created by cantilevering the landing in a gallery style. It is highlighted by a stunning glass pendant light-fitting which makes a huge impact hanging over the hallway and stairs.

The stylish simplicity of modular homes such as Huf-Haus attracted David and Deanna, not least because they are easy to maintain externally. And because Wisbech is just 12 miles from the sea (The Wash nature reserve), they liked the idea of a New England-style cladded exterior.

Both their visual and practical ambitions have been achieved using long-lasting, low- maintenance render and HardiePlank fibre cement cladding, along with a zinc-clad aluminium roof and aluminium windows with an internal timber face.

“What we most definitely weren’t interested in was building a boring box,” says David. He adds: “We were looking for perhaps what you might call a non-conventional architect, someone who would understand and interpret what we were thinking of.”

Luckily, they didn’t have to look far. Russell Swann, of Wisbech-based Swann Edwards Architecture, lives in the neighbouring village, in a sustainable home with a strong contemporary thread. They invited him for a meeting and discovered that his ideas chimed with their own. “The back of the house is all glass,” says

Deanna. “And the front is quite imposing as you come down the road. A lot of people who know me locally couldn’t believe that I wanted to live in an house like this, but over the years we have lived in all kinds of houses including a bungalow and our Georgian one, so the idea of having a contemporary-style house didn’t faze me at all – in fact it was really exciting.”

“Thermal performance was always one of my criteria,” adds David. “We were spending around £3,000 per annum on energy bills in the old place. One of my targets was to slash that cost, especially because as we get older, incomes become pretty fixed.”

To achieve this crucial aim, Russell brought together both ‘passive’ and ‘active’ design strategies to design a house with carbon neutrality and sustainability to the fore.

This meant manipulating the site’s particular characteristics and climatic conditions to optimise the building design and combining this approach with efficient M&E (monitoring and engineering) systems and renewable technologies.

“By making the building the right shape with carefully-placed windows, entries, exits and rooms, we were able to reduce its energy consumption by 30 to 40 per cent,” he says.

Underpinning this strategy is a clever exploitation of the building’s orientation. The 200 m2 house is designed to ensure that the rooms requiring the most heat – the living areas – are positioned and orientated to utilise solar gain. The design placed windows in the ideal locations to maximise daylight and reduce the Martins’ dependence on artificial lighting. And conversely, it includes as little north-facing glazing as possible in order to minimise heat loss during the winter months.

Also, the outside space is arranged to provide a south-easterly facing garden at the back of the house – David’s pride and joy – which receives plentiful sunlight. The north-facing garden to the front, strategically sheltered with existing planting and structures, provides a cooler, shaded area.

Along with triple-glazed windows, the walls, floor and zinc-clad aluminium roof are super- insulated, all exceeding the minimum requirements of Building Regulations. This insulation helps to regulate and stabilise the internal temperature of the house by enveloping the high thermal mass structure, which includes concrete floors upstairs (result – no creaks). The inside stays warm in winter and cool in summer with minimal energy input.

There are no radiators, and underfloor heating runs throughout the house. All of the ground floor is tiled, and elsewhere it’s real wood flooring except for two bedrooms, including the master. “The underfloor heating was for aesthetic reasons first and foremost,” says David. “But the really pleasing thing is that the heating is so uniform. You don’t go out of the living room into the hall to be met by a blast of freezing cold air, the temperature is ambient throughout.”

There is also a 4 kWp array of solar panels on the south-facing part of the roof. All these measures ensure that the building achieved an A-rated energy performance certificate (EPC), has minimal running costs and minimal associated CO2 emissions.

When the final air test was undertaken, it revealed that the building is an impressive 2.39 m3/h@50pa. Russell says that this is five times better than the minimum required by Building Regulations.

With the design in place and passed by the local council planning department with only minor adjustments necessary, the next step was to find a construction team who were up to the job.

This was the biggest challenge of the entire project. “It was really quite difficult to find people who were willing to come out and price up what is, for the area, an unusual job,” says David. “Tradesmen found it a bit tricky to give us a firm price for whole aspects of the job as they weren’t sure, so we ended up agreeing a reasonable day rate for a lot of the work.”

He says that he also approached the problem by choosing key people, starting with the groundworkers, then using their connections to find the next team: “If you need someone to lay blocks and bricks, for example, you’d use his connections to find a good carpenter. In that way, you make sure that you are getting a compatible team, so that when you get an issue the boys are not blaming each other, saying, ‘it’s his fault, he should/shouldn’t have done this.’”

As well as taking charge of sourcing almost all the building supplies himself, visiting local quarries for instance, and haggling hard, David did all the internal painting, helped by Deanna. Most of the walls are light stone, boosting the already copious amounts of natural daylight which make the internal spaces both airy and calm. It took several coats to cover the sand and cement render, used in place of standard plaster as one of the careful measures to keep costs under control.

Deanna describes the interior décor scheme as “contemporary classic”. She admits she found it quite hard to come up with a look that felt both comfortable and fitting to the house’s ultra-modern aspects, such as the over-sized doors and streamlined kitchen and bathroom fittings: “When I first thought about it, I thought that oranges and greys would work, but then I decided that I wanted something with a bit more warmth, which is how we came to have soft colours such as plums, taupe and creams. I’m very pleased with the way it’s turned out now – not ultra-modern, quite classic.”

David is especially proud of his ingenious solution for hanging the curtains Deanna wanted up at the windows – to add texture to the room schemes and privacy. “I thought, I love the simple look but it’s easily going to look too modern and stark,” she explains. “And then I thought, I’m not going to be too comfortable without curtains. I considered shutters, but because the windows are so big they would have been too heavy. We fitted pleated paper blinds upstairs, but I definitely wanted curtains downstairs.”

However, there was a problem. The full-height window frames finish on the ceiling. David stepped in and took advantage of the six-inch void in the suspended ceiling above, creating an internal ‘box’ which not only housed the curtain track but allowed for the installation of LED lights, which cast a cosy glow downward in the evenings.

It all adds to the ambience of what is obviously a very well-loved home. “What we really like to see now is the perspective when we stand in the garden at the back,” says Deanna. “You hardly ever see your house from this angle, but we liked the view so much – with the sky reflected in the glass – that we decided to build a summer house at the end of the garden in the same style as the main house, so we can spend time in there just appreciating what we have done.”

It is indeed no easy feat to create a home which minimises carbon emissions, taps into natural resources and is a comfortable environment to live in and enjoy – and is future-proofed, with its owners in mind.

Add the fact that this project achieved all this, and set interesting design parameters in its Fenland village setting, all for a very reasonable build cost of £350,000, and it is no wonder that David and Deanna are delighted with the end product of taking that first step over the fence. 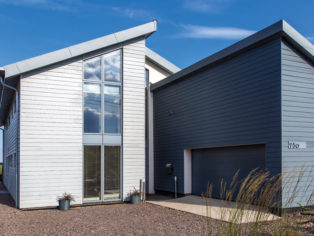 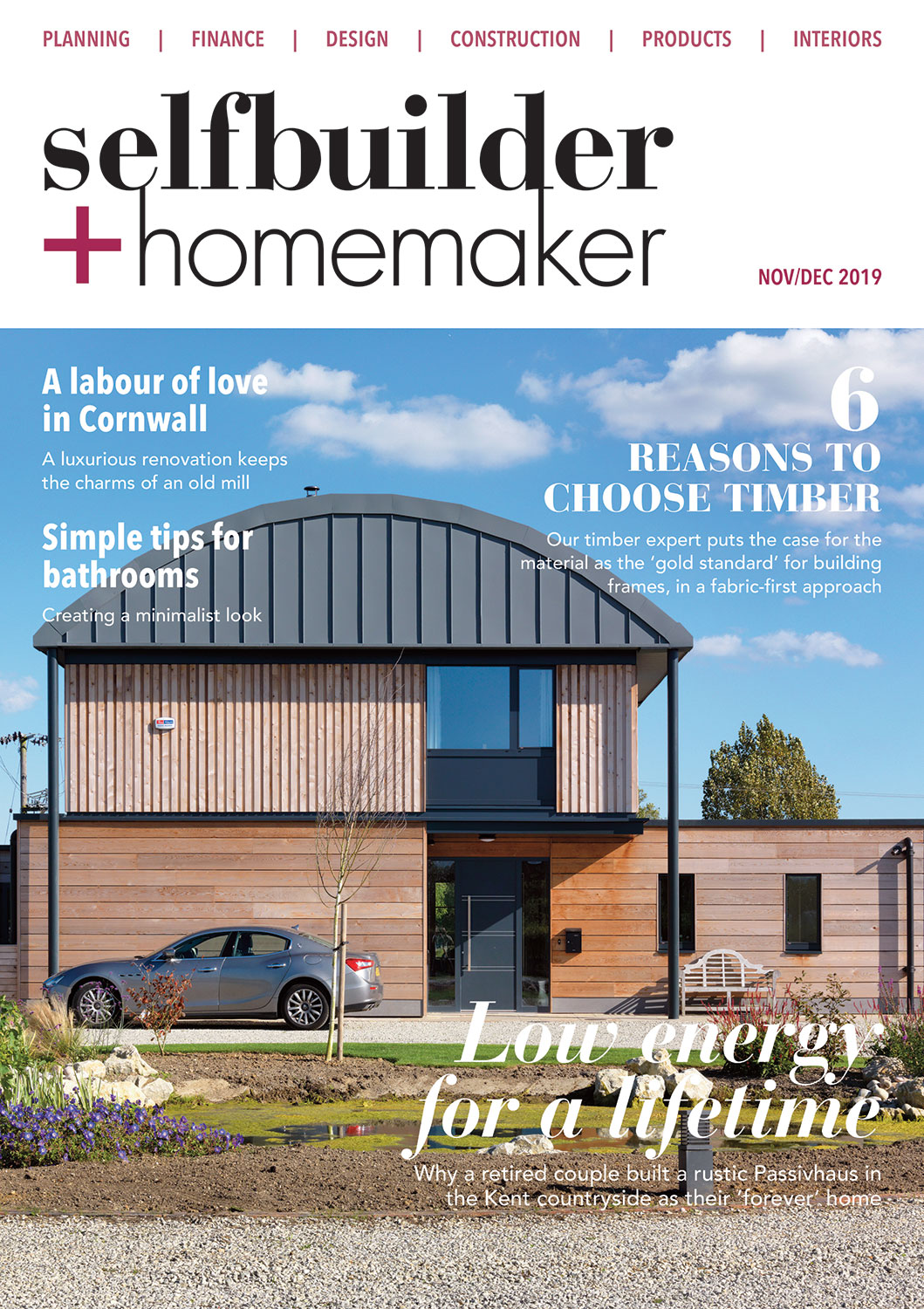 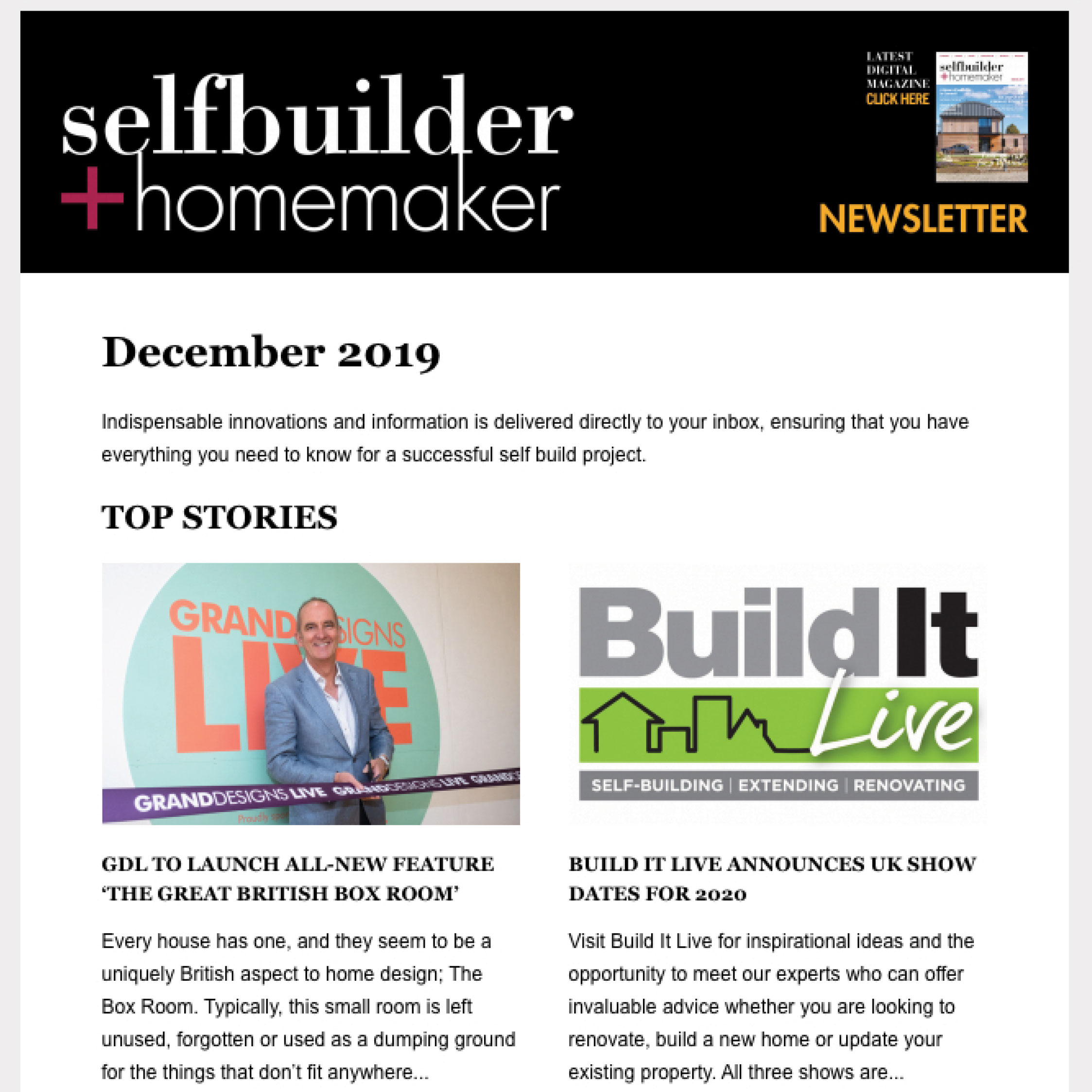