A new life in Newquay

It was a decade in the making, but ex-Londoners Jeff and Wendy East finally created their idyllic family home on Cornwall’s Atlantic coast, which started from a crumbling bungalow

As well as surfing, the humble pasty, and piracy, Cornwall is famous for its invention of a building material. The material, called mundic, makes use of waste from mines in the area by using it as the main ingredient in building blocks.

Before you applaud this thrifty approach to recycling waste to lessen the environmental impact of mining, mundic has long been a byword for crumbling construction – one that leads many mortgage brokers to balk.

But as the old adage goes, where some see problems, others will see opportunities, and for those with money to invest and a taste for serious structural renovation, there are plenty of crumbling cottages still dotted around Cornwall’s coastline that can make a dream holiday home a reality.

Like so many families living in London, Jeff and Wendy East shared a dream of creating a coastal hideaway, and had already purchased a flat in 2002 in the much-loved surf capital Newquay, where the couple had married. But in a place where even the most bijou holiday homes can easily cost half a million, when it came to upgrade from their flat, Jeff and Wendy settled on an unassuming bungalow, Egret View, constructed of mundic in Newquay.

Good advice from an estate agent led them to the bungalow, offering the potential for uninterrupted views from south to west overlooking The Gannel, the river that is home to the egrets the house is named after, that runs to Crantock Beach just 200 metres away.

“He said it was best to buy the worst house in the best road, rather than the other way around.”

Always with the intention of knocking it down and rebuilding, Wendy says real life got in the way – namely their four children – and so the bungalow served as a happy if cramped family holiday home for more than a decade, before they finally began work in 2017 by knocking it down.

“We bought the bungalow in April 2008,” says Jeff. “but we had a two-year-old and another on the way, so the two-bedroom flat became too small. The bungalow had two bedrooms, but with the loft (poorly) converted to provide another large open plan bedroom. For many years we just all slept up in the top room, as it had the better views over the estuary.

“The house was in very average condition, and for 10 years we did the bare minimum to keep it to a reasonable standard as we always had it, with a view to either undertake a big extension/refurbishment project, or to knock it down and start again,” Jeff continues.

And after living in a one-room holiday space where only the most basic remedial work was carried out, there was plenty of time for the family to consider what their dream home should look like.

Jeff and Wendy were very hands-on when it came to the design for the new house, and were keen to make use of the local talent.

“We used Andy Breese at Artchart in Newquay for all the drawing and planning work. He then acted as a very reliable and helpful contracts administrator during the build. I have limited construction experience and knowledge, so Andy has been a huge help to us.”

The site is now home to a modernist beach house that makes the most of those incredible views. Behind a white-washed exterior, the Tardis-like interior featuring six bedrooms, a games room and an open plan kitchen/dining/living space with vaulted ceiling and a wall of windows leading to a terrace.

Keen to maximise the views – Cornwall’s biggest attraction – the family had plenty of choices when it came to framing the dominant view for their house. They decided to create a reverse level design with a single giant L-shaped living space on the first floor, where kitchen, dining room, living room and snug seamlessly co-habit. There’s also a cloakroom tucked away behind the kitchen.

There’s also access to a large, glass-enclosed terrace, accessed from the sliding glass doors in the kitchen area where a picnic bench resides with uninterrupted access to those views. This spot took careful structural planning to endure the 60 mph+ winds that this exposed stretch of the Atlantic coast can experience.

Although now paying its way as a holiday let, the couple were clear it would be designed as their family home first and foremost. In fact, says Jeff, the house was rejected by some holiday letting agencies, who demanded televisions in every room and ensuites for every bedroom.

“It was never designed as a business – it was always based around us, but we needed to rent it out,” he explains. “I don’t like it to be empty; it is quite nice that people get to use it as we designed it with families like us in mind.”

A similar family-focused approach was adopted with the interiors. Each of the children had their say in the design and decor of their bedrooms – the stand out feature here has to be the bunk beds with their own slide.

“We ended up with three planning consents,” adds Jeff. “Each were a gradual improvement on the original house. We wanted to make the most of the plot, the outlook, and provide a comfortable holiday home for a large family.

“We had some local objection to the planning, but construction has been treated liberally in Cornwall over the years, so planning is nowhere near as difficult as it is in London. We didn’t want to cause overlooking or have a negative impact on the neighbours or area – quite the opposite, so in fact all three applications were approved under delegated powers.”

The original house was knocked down in 2017 and the new house signed off as complete in late December 2018. In the months since Egret View was completed, old houses in the surrounding area have begun to disappear and new beach houses have sprung up. And there are still plenty of opportunities (not least a huge derelict hotel which sits overlooking Britain’s surfing capital, Fistral Beach).

The final design of the house opens onto the ground floor, which is home to a family/games room (with the unusual addition of a climbing wall), and the six bedrooms. A large hallway and the utility room both feature wonderfully weathered looking Indian sandstone floors. “We had to use exterior grade paving in order to get the worn look,” he explains. “There is method in our madness though – with the amount of sand that a beach house has to tolerate, carpet, timber or ceramic tiles just wouldn’t have lasted, so paving was the sensible choice.” Although the slabs are thick, being designed for external use, Jeff was still determined to have underfloor heating.

The utility room leads out to a landscaped rear garden with patio, lawn and outdoor shower – and wetsuit drying area for après surf. At the front of the house a large well-lit garage offers extra space (perfect for the table tennis table installed), and includes a private storage area for the family.

Even on the ground floor, careful design means bedrooms are not excluded from the view. A master suite opens on to a large sun terrace, while four of the remaining bedrooms offer views of either Crantock Beach or The Gannel river.

“If we were designing the house to live in permanently, the bedrooms would have been bigger, and there would be fewer of them,” he says. But a flexible design has allowed some room for realignment; there are corridors between rooms where doors can easily be added to create bedroom suites. The couple eschewed installing solar panels due to expected heavy maintenance, caused by the property’s exposure to severe weather.

Designing Egret View’s interiors was Wendy’s domain – her shopping list for her family’s holiday home included some unusual items, most notably a small sailing boat which ‘floats’ on the polished wooden floors and delineates the grown-up living room from the snug (which houses an L-shaped sofa that can seat the four children, and a 55 inch TV) on the first floor open plan living space.

“I always wanted a boat,” says Wendy. “I thought we could sit in it and read.”

The original design for the open plan living space was to wall off the snug area. But in the end the family decided the boat would create a natural barrier. It features its own light on the top of the mast and is often filled with cushions. Much of the furnishings came from the old house – chairs that belonged to Wendy’s grandmother sit alongside on-trend mid-20th century design pieces, and an Ercol sofa. The vaulted ceiling displays stunning glulam trusses from which cluster of giant paper lampshades hang.

“Our favourite structural element is the exposed truss in the lounge area,” says Jeff. The vaulted ceiling was Wendy’s idea, the glulam Andy’s.

A wall art sculpture of fish by Cornwall glass artist Jo Downs, which was ready long before the house offers a hint of the coastal position, alongside a wall-mounted fly fishing rod above the staircase.

The kitchen is stuffed with modern appliances – an American fridge freezer with water dispenser and ice box, electric oven and Neff gas hob, microwave and two dishwashers, but it is the striking splashback which is typical of how the family added their own tastes to the house that draws the eye.

“People either love them or hate them,” admits Wendy. The designs are random, and boxes are bought unseen and filled with potentially 50 or 60 different designs. Lighting features, including the makeshift chandelier (created from a reclaimed girder) over the giant dining table are bold to stand up to the vaulted ceiling.

Local tradespeople carried out much of the work on the house.

“The only thing that came from London is the kitchen,” says Wendy.

And their advice to other self builders? Be prepared, says Jeff.

“Rather boringly, we had no particular surprises, good or bad. We were well-prepared, had a good team, and had the money in place before embarking on the project. The only real disappointment was our main contractor being let down by two decorating sub-contractors in August 2018. That ended up delaying planning consent by over three months.” 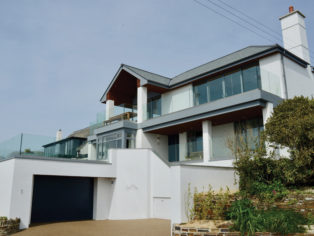 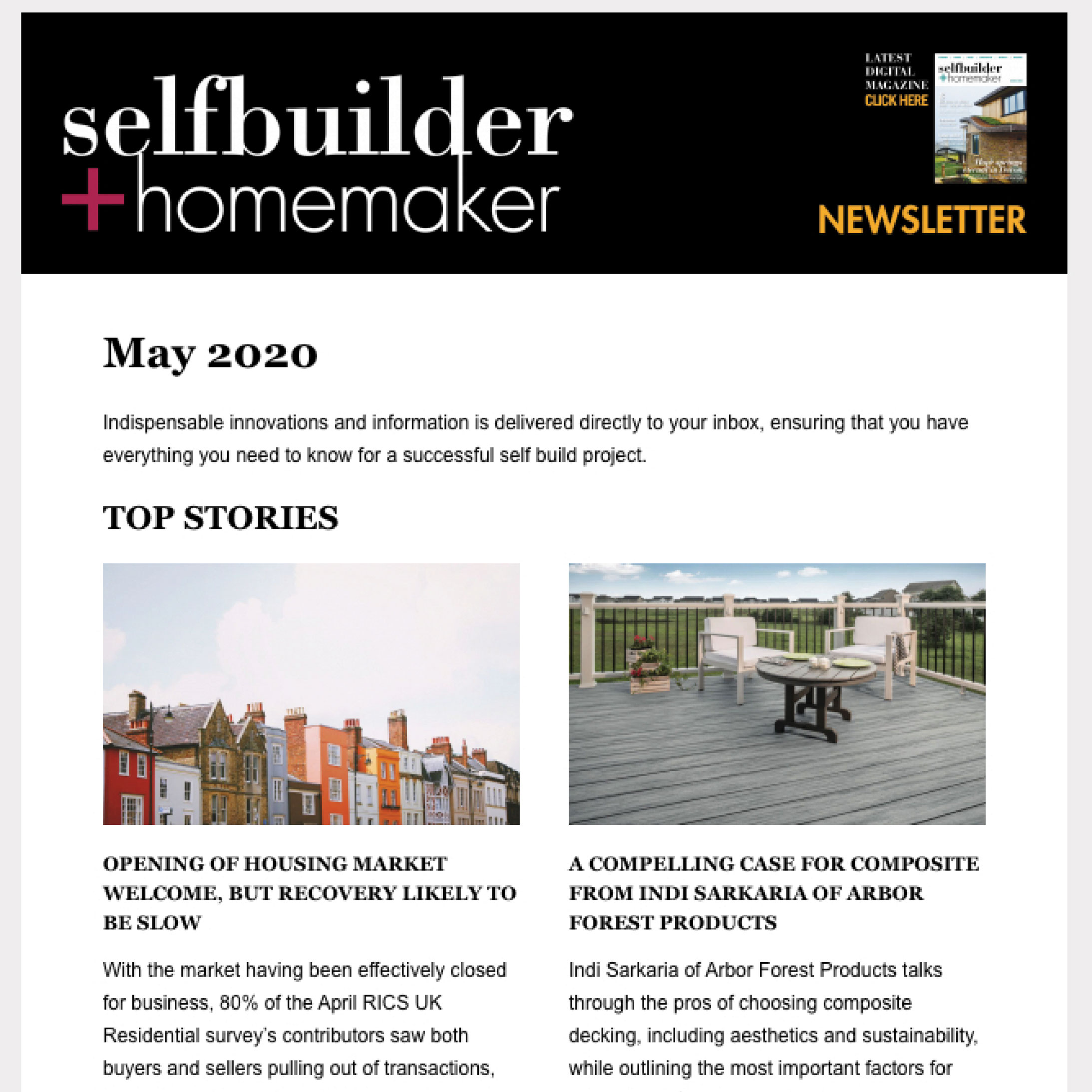